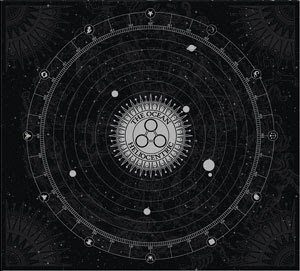 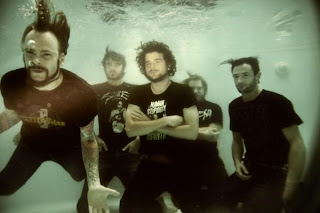 It Turns Out That The Johnny Depp Is Not The Center of The Universe.

The Ocean is a progressive/post-metal group from Germany. This is the first of the two records they are releasing this year and the follow-up to 2007's groundbreaking success "Precambrian." This new record is almost a completely new line-up, with only founding guitarist and composer Robin Staps.
This record, as previously stated above, features an almost completely new line-up apart from Staps. This new group's first attempt at recording an album came in the form of this and it's companion record, "Anthropocentric." This new record represents the more post-metal, post-rock, and progressive side of the band's sound and is demonstrated in forms that many might find a little off-putting after "Precambrian."
The concept of this album, like all The Ocean albums, features a concept, is about the evolution of heliocentric beliefs and it's effect on Christianity. This comes with lyrics that have been taken and adapted from famous poets, scientists, and even the Bible. A notable influence sited by Staps has been "The God Delusion" by Richard Dawkins. Each track moves through the gradual evolution of the process and theory progression in history, making an much more elaborate concept than most black metal bands nowadays.
As with previous releases from the band, orchestration is used, to it's full extent. Don't mistake this comment for saying that there is over orchestration, what is in these tracks fits perfectly with the context of what goes on within any given track. Depending on the track, you could either get a full on orchestrated track with vocals that crescendos or you could get a heavier track that mixes it up with orchestration used more for ambiance and atmosphere.
Unlike other The Ocean albums, this one has actually 2 ballads on it. These ballads are more piano and vocal based tracks that are probably what a lot of the fans of this band don't want to hear as these songs are very naked sounding compared to other tracks, and ever other albums. Ptolemy Was Wrong is the first of the two and builds a lot more into a more typical The Ocean type of song, while Epiphany stays within it's perimeters as a more ballad song throughout it's course.
Another change in this album is the more obvious use of clean vocals. New vocalist Loïc Rossetti uses a much more emotional and expressive style of singing than that of previous vocalists in the band have used. His scream is also much more comparable to that of a hardcore/metalcore singer than a death metal one. This may disappoint those thinking that this album would be a bit more grunt based with occasional singing, but his voice hits and misses within the context of the music.
While the music and the concept and even the overall sound of the record is good and entertaining, the overall vibe is a bit lacking. Listening to this record can allow one's mind to wander off due to the inconsistencies from one track to another, the first real track Firmament is strong and catchy track but the tracks that follow it feel a bit sluggish and uninspired in comparison next to it. This is not saying that these are terrible or even bad tracks, but they fail to keep the high mark set by this opener until the later half of the album with tracks like The Origin of Species and The Origin of God.
Overall, this is a decent record, but fails to live up to it's predecessor, understandably. Select tracks on here stand out and are actually worth repeated listens, and if you've never heard The Ocean before, this might be a good place to start. A good representation of their more post-progressive side, now we wait for the heavier record to follow.
Overall Score: 7.5
Highlights: Firmament, Swallowed By The Earth, Epiphany, The Origin of Species, The Origin of God
Posted by maskofgojira at 3:34 PM