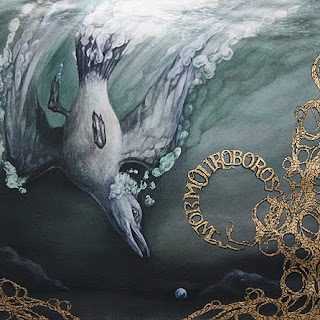 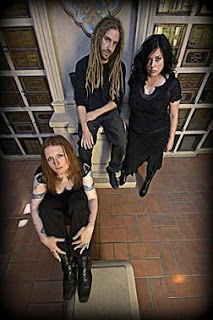 Worm Ouroboros is an atmospheric doom/folk group from California. This three-piece use a darker atmosphere than most in the newer scene of doom really do. Members have come from quite well respected groups from the more atmospheric scene as well.
The trio includes Lorraine Rath on bass, flute, and vocals, Jessica Way on guitar and vocals, and Justin Green on drums. Rath has previously come from doom metal group The Gault and ambient post-rockers Amber Asylum. Some of the principles of those groups carry over to this one as well.
The music on here kind of melds the two principles sounds of The Gault and Amber Asylum together in a way. While this is very much, and conceptually is, a rock group, the music contains only a few moments of distortion, remaining for the most part, clean. Adding to the sound is the overall slowness and sombre nature that every song brings. Another point that has to be made is that with the very slow moments comes control, every player knows and realizes his or her place in the music and doesn't try to achieve more within this sound than the song needs.
The vocals on this album, or in this band rather, fit the music as one might expect. While the music is quiet, the vocals fit that and are put into a more whispered tone. The vocals are delivered in, also, a similar style to Amber Asylums, when they use vocals, and are semi-operatic sounding. When the two vocalists harmonize is when things really seem to get dreary and melancholy, but, that's to fit the music.
The bass on this album is actually really jazzy sounding compared to how the guitar and drums are played. What you will find on here is quite a bit of bass fills, and also a lot of faster bass playing compared to what the other instruments are doing anyway. But the bass is still slow and doomy when it needs to be, listen to Goldeneye.
The guitar, as previously stated, is, for the greater duration of the album, clean and quiet sounding. But the guitar also brings a sense of psychedelia to the album and it's songs. Due to the slow and clean sound of the guitar, as well as the echo effect used on it, the vibe of the album feels a little retro. Even when the guitars go distorted, the effect is still very entrancing and melodic, Riverbed, sorry if you were expecting to hear some speed metal riffs.
Overall, this is a great record, if only a bit monotonous at times. The slow and constantly interwoven webs of guitar and bass draw you into an almost dream/trance induced state while listening. Be warned that this album is a bit of a grower and takes a little more time to get into fully, but once you find the beauty in here, it will almost amaze you. Fans of modern psychedelia or doom rock, or even to a farther extent, Jefferson Airplane, would find this to be a rewarding experience of an album. Check this out.
Overall Score: 9
Highlights: Winter, Riverbed, Brittle Heart, Pearls
Posted by maskofgojira at 11:32 AM