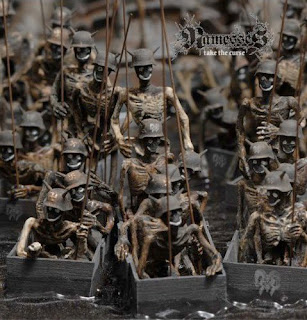 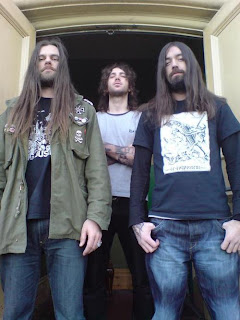 Brethren, Rise For The End Is Upon Us.

Ramesses is a sludge/doom metal band from the UK. The trio is known for their guitarist and drummer being ex-members of the doom legends, Electric Wizard. This is the trio's second full-length record following up their multiple splits and EPs after their debut.
The style of Ramesses is what one might expect from the genre, slow and heavy. The sound on here is very dirty and crusty, but does not feel as old as you might imagine it being. These guys play their doom with a hint of black and punk influence as well as the obvious Sabbath, Vitus, and Pentagram. But one couldn't really put them into the sludge as much as the doom.
You really can't put your finger on how one song seems like one band and the next one sounds like another band. The heaviness and gruffness in Black Hash Mass reminds of the last Celtic Frost record while the title-track, Take The Curse, kind of sounds like Neurosis' "Through Silver In Blood" record. Not one track really sounds like another, which is good when in comparison to other doom bands that usually have similar sounding tracks.
Despite being so based in doom and how slow this is, it really carries with it the air of psychedelia. Tracks like The Weakening and Khali Mist really exemplify this by being almost hazy and noxious sounding. This could definitely be traced to the former Electric Wizard sound that is still very much in here.
The guitar playing of Tim Bagshaw on this record really captures doom in it's truest and most traditional form, but also manages to put his own influences into it as well. Summoning the sounds of Tonny Iomi and Wino into his guitar and morphing them into even more demented and mournful tones that are wretchedly slow, hear Baptism of The Walking Dead. This is the sound doom really should strive for in their guitar players, heavy and crushing, but with an emotion that can be felt.
Vocally, Adam Richardson is quite diverse for a doom vocalist. His voice goes up into your old-school singing, into low funeral doom growls, black metal screams, and even a bit of stoner rough talking. Whether one appeals to a listener's ear more than the others is all subjective, but this guy can at least give doom vocalists a run for their money in terms of diversity, but maybe not consistency.
One thing that is a bit of a turn-off is the amount of samples used within this album. In almost every track, a sample from a movie is used; granted, these aren't your cheesy modern day samples from movies like "300" or "Goodfellas," these sound like they're from old horror movies. Just the sheer amount of samples used is a bit annoying, but they aren't so bad that they ruin the song or bog it down.
Overall, this is a very different type of doom metal record, mainly due to it's diversity. There aren't a lot of doom metal bands that experiment within different styles and make it work for them, granted, this record is a bit schizophrenic at times, but it works. Chances are that if you aren't into doom you probably won't like this, but if you are, check this out.
Overall Score: 8
Highlights: Terrasaw, Baptism of The Walking Dead, Another Skeleton, Khali Mist
Posted by maskofgojira at 1:01 PM