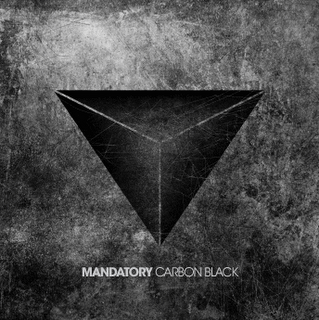 Carbon Black Is Not A Carbon Copy.

Mandatory is a progressive thrash metal band from Austria. Their sound may not be completely new, but it does sound fresh. This is their debut full-length record expressing an interest within the progressive metal of old and new within their sound makes them a bit more intriguing than your newer prog band.
Like mentioned above, this band's sound is not completely new or groundbreaking, but their sound is fresh. Influences like Nevermore, Fates Warning, and even Into Eternity are all present within this album's sound. Technical song structures, great musicianship, and thrashy riffs make up the basic description of what you'll find on here.
Along with your regular progressive thrash, a comparison to melodic death metal, ala Soilwork and new In Flames, could also be drawn. Even when the riffs on here are fast and technical, they are still melodic and catchy, check Autumnized. A note to mention is that these guitarists can play their instruments well, many bands write progressive music, but fail to write anything memorable, that is where this band succeeds.
The guitars on this album are the highlight. These guys manage to make their songs catchy and melodic but also progressive enough to keep them interesting for a while. Another great thing on here is the solos, hear Architect and Seven for some great ones, they are different from the average thrash solo, and hark back to Fates Warning, Symphony X, and even Dream Theater guitar solos.
The songs on this album are all fairly short, most being under 5 minutes. For the average prog fan, this might seem odd, but these guys are actually, another Into Eternity comparison, fit a lot into their songs. The structures, as previously mentioned as well, go into different directions and are probably a bit less predictable then Into Eternity.
The only thing that could prove difficult is that the vocalist's screams are a bit less tolerable than others. His scream resembles more of a metalcore singer than a normal more operatic or melodic singer, but he does bust out into a death growl in a few songs. His clean singing on the other hand, while resembling the metalcore sound as well, stands out due to it not being used as the main hook within a song; within a track like Death Avenue, the cleans are emphasized within a certain section and don't become overused.
Overall, this album has a lot of good without a lot of bad. For a debut record from a band that isn't really doing anything new, they play what they are extremely well, so points to them for writing such great songs. If you're a fan of melodic progressive metal, or a fan of guitar solos, check this album out, you won't be disappointed.
Overall Score: 9
Highlights: Universus God, Mainstream Messiah, Seven, 1000 Words, Majestic 12
Posted by maskofgojira at 1:20 PM