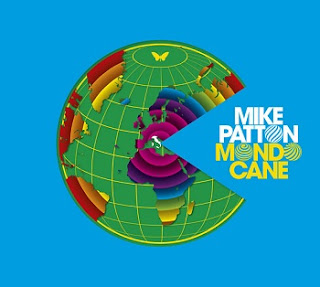 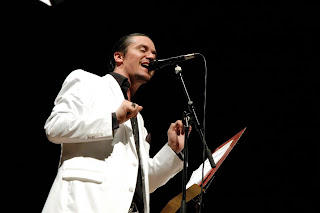 He Went With The Dolorian For This Trip.

Mike Patton, the frontman or multiple groups and notorious noise maker, has returned with his Italian pop record. If you don't know about this group, this record will, once again, have fans on the fence as to whether they love or hate this record. Containing songs from several generations ago, depending on your age, you might find some of these stored in your memory banks and have just forgotten about them in recent years.
For those that are not aware of what this record is supposed to be, you might be a little shocked. This is not another crazy avant-garde metal band, Fantomas, or a spastic alt. rock group, Tomahawk, or even frantic pop, Peeping Tom, this is something a bit more large. Taking songs from 50s and 60s Italian pop music and re-recording them in his own image, Mike Patton has gathered together an authentic orchestra for this project.
These tracks were originally composed and recorded by such respected composers as Ennio Morricone, Fred Bongusto, and Nico Fidenco. Patton not only recovers the spirits of the original sounds and vibes from the original tracks, but makes them into his own. Taking dramatic singing and vocalization to the next level is what Patton has done with the last decade of his music, this one doesn't push anything new, but as another review put it, it does re-emphasize that he can still sing a good tune.
While most of the stuff on this record is what you might expect from composers, you still get a bit of variation on here as well. While tracks like Che Notte! and Deep Down are in that vein of classical pop music with strings, piano, horns, and all the above in terms of the style, tracks like Scalinatella, which is a ballad with a sole acoustic guitar and voice, or Urlo Negro, which is a very bombastic track where Patton just yells most of the verse before going into a very melodic chorus, where more experimental nature comes through. Patton fans don't have to worry about this being "just" an orchestral record.
Overall, this is a nice and fun record with some great catchy songs. This most likely won't impress those who want another dose of weird from Patton, but for those that prefer his singing, this is a must. This is also something that won't win any awards for originality, but it's still a nice listen that actually has quite a bit of replay power. Check it out.
Overall Score: 7.5
Highlights: Il Cielo In Una Stanza, Ore D'Amore, Quello Che Contra, Senza Fine
Posted by maskofgojira at 12:26 PM