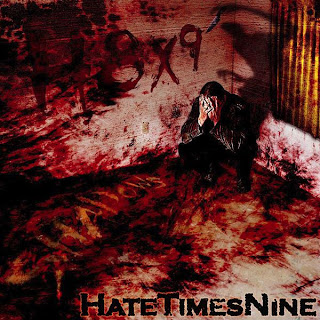 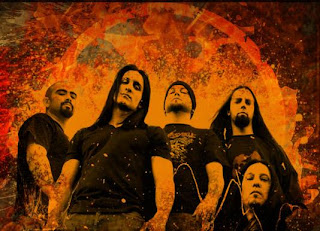 No Gore to Be Found Here.

HateTimesNine is a progressive metal band from California. The vocalist of this band, Travis Neal, is also the vocalist of melodic death metal crew Divine Heresy. The sound of this group is not what one who knows his previous work to sound like.
Though this band is progressive metal, they are more modern sounding than usual bands within that genre. The playing is top notch for sure, and like all prog bands should, feature a lot of different influences. Traces of bands like Dream Theater, Korn, Fear Factory, Meshuggah, In Flames, and a hell of a lot more in here. Influences within any given song are up for grabs, and these guys do a great job of keeping things clearly within the progressive metal genre, but do enough to make you question whether that's actually the genre they are in.
Guitar playing is exceptional, and features more experimentation than one might expect. The riffs are in the same vein as the whole kind of Pagan's Mind and Vanden Plas, but are heavier than those bands. Melody is another part in here, keeping things very structured, but experimental at the same time can be a daunting task for most new bands, but these guys manage to pull it off well. Guitar probably feature the most amount of experimental effects put on them, hear In Darkness and Convergence.
Songs on this album are shorter than most prog-metal albums are, most tracks are under the 5 minute mark, but these guys, once again, make it work. While they're not doing the whole genre shift from one to another, they fit enough within a 4 minute song to make it proggy and experimental. Within every track you'll get those little neo-classical shred, or BTBAM, moments.
Unlike Travis' previous work in bands, the already mentioned Divine Heresy, and The Bereaved, his work in here is much more fluid sounding. The vocals are clearer and feature a bit more uniqueness to them. The diversity demonstrated on this album really makes him a lot more noticeable a front-man than his work previously, hear Whitenoize Lullaby.
There will be plenty of people out there criticizing this album for being too melodic or too modern sounding and all the above, but this album has explored a lot more ground than most debut records do. The amount of accessibility is undeniable, but this is much too abstract sounding for most scene-kids or mainstream heads to get into. This band really has showcased a lot of talent for writing this sort of music.
Overall, this is a great progressive metal album with all the right modern sounding influences mixed in. If you're a fan of melodic metal with odd proggy riffs and large choruses, this is for you. This blew away any expectations I had for this, check this out if you haven't already.
Overall Score: 9
Highlights: In Darkness, Leading The Fear, Halo of The Sun, A Shadow Always, Sever The Ties
Posted by maskofgojira at 6:42 PM