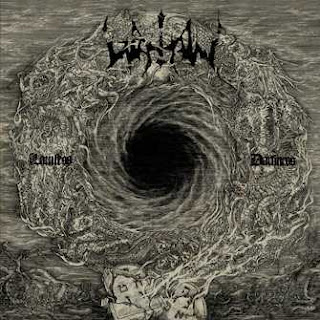 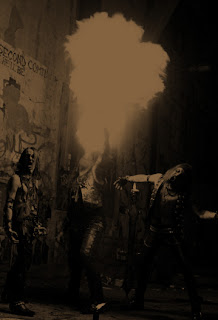 Watain are a group from Sweden that have been producing some of the best black metal in the last decade. Frontman Erik Danielsson played bass in the final line-up of Dissection and tries to convey the same spirit that that band did in their time. This group has once again produced a highly unique brand of black metal that only they have been able to do.
While no one could ever say that Watain are reinventing the black metal wheel, no can say that they haven't kicked over half the genre's asses for the last decade. Having released 3 albums that took elements from Mayhem, Dissection, and Darkthrone and re-amped them with better production with every album, along with creating a more and more progressive scope of sound and an increase in effective song-writing as well. Pushing boundaries while remaining firmly within the genre's own foundational roots.
Musically, this album is just as aggressive and in-your-face as ever, but the melodic side of the band is as, if not more prominent than before as well. The progressive nature that the band has slowly been moving into their sound from 2007's "Sworn to The Dark" record is also becoming more noticeable within tracks like the instrumental title-track, Lawless Darkness, as well as the record's concluding song, the 14 minute Waters of Ain. But don't let this fool you into thinking that the band has abandoned their traditional black metal sound, as stated multiple times above, you have tracks like Malfeitor and Reaping Death which bring the melody, but also some more Venom and Bathory influenced blackened thrash.
Danielsson's vocals are just as angry and raw sounding as ever as well. Remaining steadfast in his style of a sound between a death metal growl and a black metal rasp, he has his own unique flair that is undeniably his own. Poignant words spit from his mouth into your ears like venom (a bad metaphor really), but while you may not agree with the words themselves, his delivery is top notch as well as his performance.
Once again, the production really makes this album even greater. While this is by no means a clean record, compared to a band like Dimmu Borgir or Cradle of Filth anyway, it is not a dirty sounding record either, not like early Darkthrone or bands that take away from those records, but fits comfortably in between them. The production on here allows you to hear everything clearly, except maybe the bass, but also keeps the band fairly raw and primal sounding as well. There is plenty of reverb and atmosphere on here to satisfy any black metal fan.
Overall, this is a must for any person that considers themselves fans of black metal. Watain is a group that has shown that they can make albums that, no matter how great the last one was, they can surpass it without loosing any of the fire that they've always had. Great riffs, great vocals, great mood, this is an album that is one of the best of this year. Watain has topped themselves with a record that is going to be hard to top by them and other bands in the genre as well.
Overall Score: 9.5
Highlights: Every Song Is A Highlight
Posted by maskofgojira at 4:30 PM