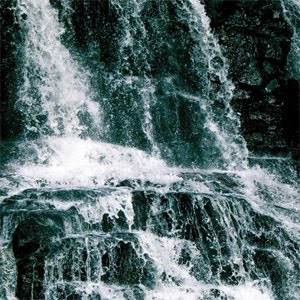 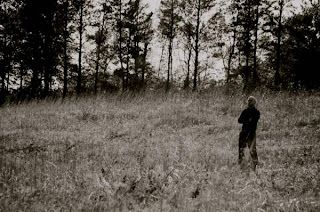 Out In The Woods Where Nature Surrounds.

Celestiial is a funeral doom "trio" from Minnesota. The word "trio" is used loosely due to the fact that this is really a project formed and conceptualized by Tanner Reed Anderson. This group really explores natural and more ethereal methods towards the funeral doom style that are only now starting to become more recognized within the metal world.
Something that I found to be intriguing about the sound of this album was the use of water or rain throughout its entirety. From first to last, the sound of rain can be heard, sometimes up in front, sometimes more in the background, but it's still there. This can prove a bit tiring to hear, with this sometimes being the only sound at certain points in the album, and, at times, even drowning out the other instruments.
Though this is funeral doom, it is by no means a record that you could hold up to bands like Esoteric or Mournful Congregation. While those bands utilize heavy, distorted guitars that move at a sluggish pace, their structures and compositions are all very arranged and put together into a set format, this record is more free and open within the boundaries of improvisation. This moves the music into a very ambient sound at some points, with slow, dirge-like riffs playing more to an overall vibe, as oppose toward a song.
Like most funeral doom, or doom metal in general, albums, this album is long, but compared to some other bands in the same genre, this is relatively short, only clocking in at around 56 minutes. The five tracks that are on here could really be seen as a lot of filler, as 3 of the 5 are short, clocking in at under 5 minutes. The other 2, being over 15 minutes both; with Great Storms Carry My Sadness being just over 30 minutes.
The two long tracks on this album really are the main attractions. These tracks move through droning guitar chords to ambient moments of rain and even wildlife calls, animals, if you were wondering. Not the most appealing or mystifying style ever performed, but alludes towards the freeness of nature itself, moving slowly and is unpredictable, in some cases, but I'm referencing more towards the improvisation element here.
Tanner's vocals really differ from the low grunts that other doom bands use in their sound. One could compare his screams to that of the suicidal black metal bands, but not quite as cheesy or cliche sounding as that. The screams that he belts out are primal and emotional sounding, so they don't really feel all that contrived; seeing as there are also very few of them in the entire record adds to this as well.
Overall, this record is decent for what it is, the style itself does not lend itself towards making catchy hooks and melodic riffs. The opening tracks are decent enough, but this record trails off near it's end and can become rather monotonous, boring even. If you're into the genre you might want to at least hear this record, but otherwise, it's nothing special that you should concern yourself with.
Overall Score: 4.5
Highlights: From Elm Blossoms A Rose, Songbirds Depart Through The Passing Near The Garden
Posted by maskofgojira at 2:26 PM