Exodus - Exhibit B: The Human Condition 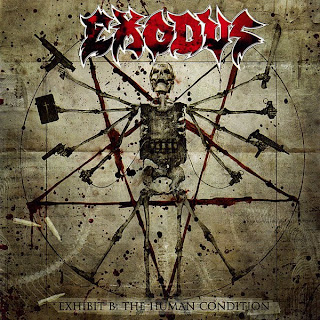 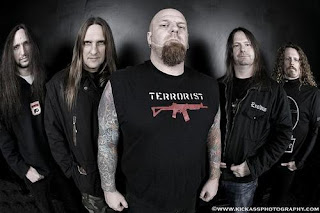 Rebel With A Cause.

Exodus, as many are probably familiar with, is a legendary thrash metal band from California. After decades of line-up problems, the band has, in recent years, found a steady line-up and released some of their most consistent work. This new record continues that streak with another trashtastic punch in the face.
What many might see as an odd decision, the album starts with an acoustic section, but this only lasts for a little while, as the track, The Ballad of Leonard and Charles, soon goes into a great chugging riff. This opening track, excluding it's opening, really harks back to the band's earlier sound of heavy, fast, aggressive, and melodic songs, with, as I may, killer solos. While the title says "Ballad," it is certainly anything but, musically speaking, punching you in the balls from the get-go.
As always the guitars on the album really showcase a mix between aggressive speed metal and melodic heavy metal perfectly. Gary Holt and Lee Altus are on fire, seeming to top themselves with every release. Solos range from outlandish whammy-bar playing, melodic Iron Maiden-esque dual leads, to typical slick speed playing, as well as more; their riffs are catchy and is not overtaken by Rob Dukes vocals at all, never being content just being the background.
But Dukes is still a vocalist, and he pounds out those shouts/screams with full intensity. His words being the venom that speaks of what the cover of the album is, war, death, evil, and all the above. While there are some who doubt and dislike his vocal style, he is definitely a front man that can at least speak of some topics intelligently without sounding like a fool saying them.
While this album is still very much a thrash metal album, and the band will always remain that, you have some similar styles making their way into the song-writing as well. There are plenty of groovy and mid-paced tracks on here as well like March of The Sycophants and Nanking. You still have your more traditional sounding metal tracks, most notably in Hammer and Life, that hark back to the Iron Maiden of the mid 80s. In recent albums the band has even started experimenting with progressive metal a bit, and that is heard within the instrumental A Perpetual State of Indifference as well as in the song Democide. One thing that stuck out was the small influence of even melo-death in the opening of Downfall.
Even the drumming on the album is stellar, Tom Hunting playing his ass off. Whether it's in more simplistic grooves or rapid fire triplets, Class Dismissed (A Hate Primer), you know this guys can play. While this is no doubt a guitar player's record of choice, the drumming on here can keep up with even the best, listen to it.
Overall, this is a stellar record with plenty of replay power. Except for a few hiccups here and there, no one can really say this is a bad record, unless you hate certain members of the band or just don't like thrash. Great songs, great riffs, great choruses, what more could you want.
Overall Score: 9
Highlights: Beyond The Pale, Downfall, Nanking, Good Riddance
Posted by maskofgojira at 9:29 AM