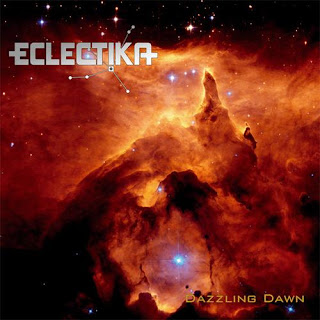 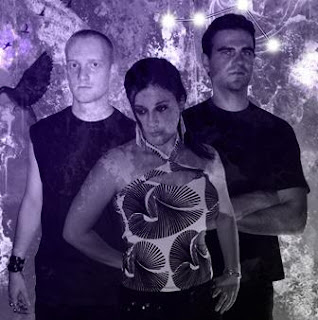 In Space, No One Can Hear You Scream.

Eclectika is a post-black metal group from France. This is their second "official" full-length record coming 3 years after 2007's "The Last Blue Bird." This album really broadens the horizons that that album concluded with and includes some stuff your traditional, kvlt fan, will most likely hate.
The trio that comprise this album include three vocalists in all. Essentially, you have Alexandra Lemoine and Aurélien Pers performing only vocals, while Sébastien Regnier does vocals and everything else. You really do get a weird assortment of vocals on here, from traditional black metal rasps to operatic male and female vocals. Just to mention, the female vocals on this album actually seem to hark back to early Cradle of Filth styled vocals, think "Dusk... And Her Embrace"-era.
Compared to the last album, this album is much more avant-garde sounding. The last album could be considered as black metal with traces of prog rock and neo-classical elements within it; and that cannot be said from this album. Sure, those elements are still in here, but more prevalent influences of industrial, or electronic music, are present within the first "real" song on here.
The overall composition of these songs feels very classical. Whether it's the more symphonic traces found behind the guitars, or just the way the guitars are played, makes this feel very classically composed. One riff to another sounds how you would imagine one orchestra moving from section to section, hear the title-track, Dazzling Dawn.
Compared to even your typical black metal album, the production on here is very odd sounding. The production, as a whole, is quite clean for a black metal band, not as clean as some of the more well known acts, but for an underground act, but the music really can be gauged from this, all opinion based, but it just sounded a bit different. Another thing is that, and this one is really subjective, is how loud the keys sound, some are louder than others, they are quite high up in Les Démons Obsédants Du Regret, but are put in a regular spot on Sophist Revenge.
The guitar solos on here though, like mentioned above, recall a very neo-classical kind of vibe. Another thing is that they are louder than the other electric guitars as well, but seem to be placed in a normal spot in the mix. Solos in There Is No Daylight In The Darkest Paradise really stand out on here.
An odd thing on here is the number of instrumentals and/or interludes as some might see them. You essentially have 4 instrumentals on this album, and they're not your average type of interlude based tracks. All of the tracks are keyboard dominated, but 3 of the 4 are performed in symphonic and orchestral based parts that are actually quite well done, don't really think of them as just bridging one track to another, because there are actually two side-by-side each other, but as actual songs/tracks on the album; you'll get through this a lot easier thinking about it this way.
Overall, this is a very odd album, if you're going to listen to it, do it with an open mind. While this is neither the most progressive or avant-garde black metal record, it is also not the most kvlt or trve one either, so it will probably let down people from both sides, it is still unique sounding. There are very few bands out there, that I know of at least, that sound like this does. Check it out.
Overall Score: 7.5
Highlights: Les Démons Obsédants Du Regret, There Is No Daylight In The Darkest Paradise, The Next Blue Exoplanet
Posted by maskofgojira at 4:29 PM