Order of Ennead - An Examination of Being 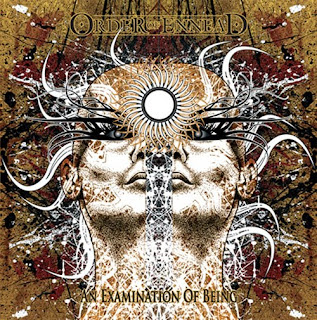 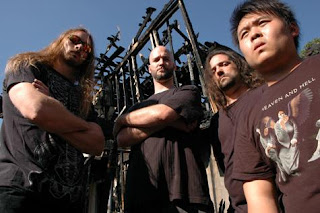 The Concept Of Philosophy Is Such A Large One Indeed.

Order of Ennead is a blackened death metal band from Florida. Having gained some notoriety in the underground by having death metal drummer extraordinaire, Steve Asheim (Deicide) on it, as well as members of tech-deathers Council of The Fallen as well. This new album demonstrates some more of what you heard on the debut album, but with a focus on writing more effective songs.
The music side of this album is like the description of the band is, blackened death metal. On here you'll find the brutality and technicality of death metal, but more tremolo picked riffs and black metal shrieked vocals. It really doesn't differ itself from that title too often in it's 45 minute coarse. The songs on here are fairly straightforward sounding with not too much diversion from a straight verse-chorus-verse-chorus format, but there are a few curve balls in here.
Among the curve balls the band throw in include ...In The Mirror, which sounds more like a technical thrash song until the vocals come in, and returns to that when the vocals stop. This track features a great solo the actually makes this track stand out the most among every other one on this album. Two other curve ball includes the title-track, An Examination of Being, which includes numerous time/tempo shifts throughout it's relatively short playing time, and A Betrayal of Self, which is similar in style to most of the other tracks, but manages to slow itself down into a mellow section during several points within the track.
Asheim's drumming, as usual, is ferocious throughout this record. Blast-beats, incredible double-bass work, and frantic fills, you would expect no less by this man. By no means is this a bad thing or a fault of his own as much as the production, where the drumming seems to focus more on his drumming rather than the actual guitars.
Another thing that has to be given to these guys is John Li's soloing on here is fantastic. His soloing actually makes a track like The Scriptures of Purification much better just from being there, very rarely will the solos on here break a song. Unlike the crazy shredding of the debut album, the solos on here are much more melodic and make use of more harmonies, recalling a melodic death metal vibe at times.
Overall, this is a decent record for what it is, technical, constantly blazing, and melodic soloing. If you're into this style of black/death metal, you'll probably already have this album and probably have listened to it over and over again already, but for those that haven't heard it yet, it's decent and isn't anything that will blow you away. You'll find that some tracks just sort of sound the same after a while, there are a few standouts, but the entirety of the record is pretty much all in the same vein as the last one.
Overall Score: 7
Highlights: Lies Upon The Lips of Judas, ...In The Mirror, A Betrayal of Self
Posted by maskofgojira at 3:11 PM