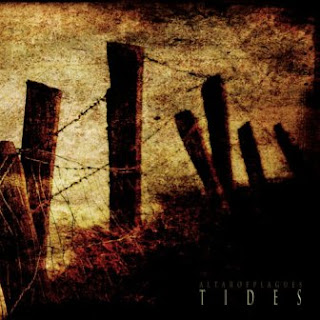 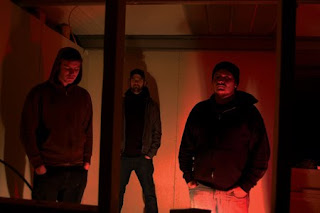 We're Heading Out To Sea.

Altar of Plagues is a post/progressive black metal band from Ireland. This EP is the follow-up to their acclaimed debut album last year. This album kind of picks up where the last album left off, but seems to focus more on the darker side of the band.
While the debut full-length from these guys last year was by no means a light and easily listen, this record proves to be a lot more aggressive sounding, but not in the way one might expect. Yes, these guys still make long songs, both tracks on here are over 15 minutes long, and yes, they still have a very post-metal/rock way of building up tracks, but it's the overall sound of this record that has these guys sounding darker. The aggression I'm referring to comes in the rawness of the recording, the darker tones used, and the overall more dissonant sound found on here are the aggression being referred to here.
The gritty sound of this record really lends itself towards the more doom atheistic being played on this record. While you still have those black metal riffs, and I'm not inferring that this is the band's doom record, but the sound takes a more sludge/post-metal like approach instead of black metal. The band is really focusing on the aspects of their sound where the songs build and fall into and over each other, hence the title of the EP.
Overall, this is a strong release from a great new band. Fans of their older work will find this just as enticing and attention grabbing. For fans of the post-metal, progressive metal, or any form of black metal, check this out.
Overall Score: 8
Highlights: The Weight of All
Posted by maskofgojira at 5:31 PM