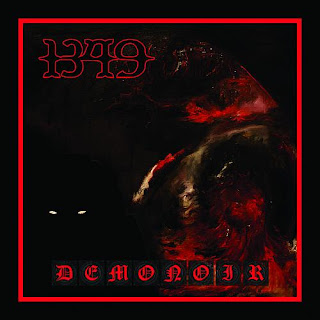 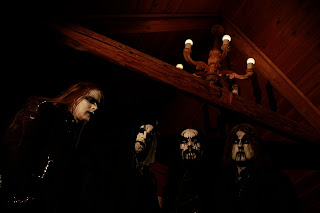 Just Gotta Get Back On The Wagon.

1349 is a black metal band from Norway. For the most part, these guys play blazing, technical, raw black metal. This is a return to that style after 2009's "Revelations of The Black Flame" record, which went for more of an ambient sound.
15 months after the luke-warm received "Revelations..." album, this new one comes out. Taking the listener through a sudo-concept about the Tree of Death within the Kabbalah religion, this albums sound is somewhat of a return to form for the band. Taking all the fury and aggression that dominated the band's first few albums, and mixing in some of the more experimental ambient sections for effect.
As soon as the opener Tunnel of Set XI ends, Atomic Chapel punches you square in the face. But this is really how the whole record is set up, with an intro track, or tunnel, setting up an ambiance and mood before the real track comes in. For some, this is just another waste of time, for the band to fill up more space so they can release what they call a "record," but in reality, these interlude tracks are short, with all of them except the outro being just over a minute long.
But as with all but the last record, the guitars blaze through with fury and precision. Archaon's tremolo picking is performed with intense speed and technicality, listen to When I Was Flesh, but also melodic flourishes that keep things worth listening to for an extended period of time without blowing your brains out from extreme brutality. The brief influences of thrash and death metal show up for moments of time, but do appear between the impenetrable wall of fiery picking. But along with riffs that sound like black metal on speed, he also manages to write riffs that are catchy and memorable, hear Pandemonium War Bells.
Drummer, Frost, also of Satyricon, sounds like he's going to have a seizure on the kit for the duration of these songs. He blasts and grinds like no other, playing blast-beats with precision and aggression that matches the guitars. While very little of his playing is actually mid-paced, when Frost slows things down, it is only for a momentary breather before blasting you again.
Vocalist Ravn sounds more potent than ever. His bellows are lower and more raspy, his screams sound deranged, and his roar is more hateful than ever before. Whether it's passion or rage, or some other emotion, his performance on this album is more extreme than on the last few records.
But within this blazing blast fest, lurks the ambiance the band tried to achieve on their last record. Subtle piano lines hide beneath the surface of blasting drums and razor sharp riffs, Atomic Chapel, and close an imploding song before it collapses on itself, Devil of The Desert. This adds a bit more depth to these songs besides the already catchy riffs and drums a drummer who sounds like he's on the verge of having a seizure.
Overall, this record is a success, overwhelming the band's last record by far. If you're a fan of black metal performed the way it should be done, aggressive and full of testosterone, sorry ladies, than this is highly recommended. Atmospheric, experimental, brutal, and entertaining, well worth your time.
Overall Score: 8.5
Highlights: Atomic Chapel, Pandemonium War Bells, The Devil of The Desert
Posted by maskofgojira at 1:38 PM