Coffinworm - When All Became None 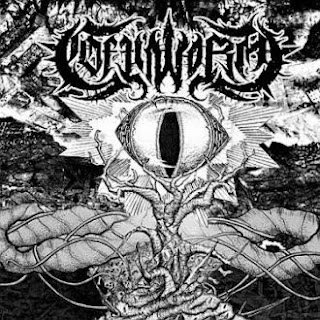 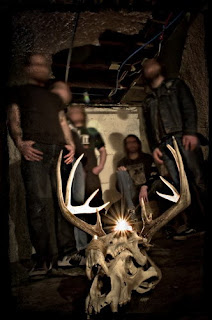 Covered In Filth and Dirt (And That's Just How I Like It)!

Coffinworm is a blackened sludge metal band from Indiana. This band was formed for the reason to create the most original sound within the confines of dingy basements, by people who could manage to stand each other, or so it says in their bio. This album is filled with the perfect mix of black metal and sludge to make this album a mainstay on any metal head's play-list.
As mentioned in the statement above, this album sounds dirty and crusty, and that's good thing here. The very musty sound that encases this record makes it all the more appealing for the styles that it combines. Production usually isn't the biggest thing, unless it's really good or it's terrible, but the production on here fits the band perfectly, raw, but not like Darkthrone, and produced, not like Mastodon.
On the musical end of the spectrum, the amount of each style on here really appeals to someone who likes elements that are actually blended together into a sound, and not just welded onto one another. The black metal is fast, dark, and atmospheric; while the sludge end is crusty, morbidly twisted sounding, and angry. The aggression is present within every part of this record, and never sounds restrained or held back, which is how music like this really should be performed if you do it right.
Vocals fit the music and actually have some depth within rage and animosity, that are heard. Vocals actually range from black metal screams to deep bellows to death metal growls, and these all usually come up within every track. Variation is a good thing, and whether or not it's just one guy doing it all or not, the diversity within the vocals fits the music perfectly.
Another great thing on here are the song titles, top-notch. How can you beat songs named Spitting In Infinity's Asshole or High On The Reek of Your Burning Remains. This is just something a bit more original than most bands have and was just worthy of mentioning in and of itself.
Overall, this record is one of the best to combine the sludge and black metal genres together, period. While this record may not appeal to everyone, whether it be for the murky, filth that is the music and vocals, or just the song titles, those who enjoy either of these styles separately, or together, will find this hard to pass up. It has to be said that these guys are on Profound Lore Records, and they are just another album this year that seems to be better than half the stuff coming out on other labels, go PLR, this band is awesome.
Overall Score: 8.5
Highlights: Strip Nude For Your Killer, The Sadistic Rites of Count Tabernacula
Posted by maskofgojira at 9:24 PM