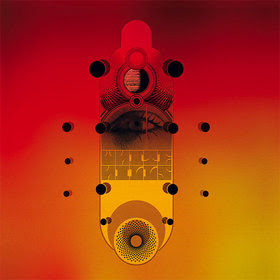 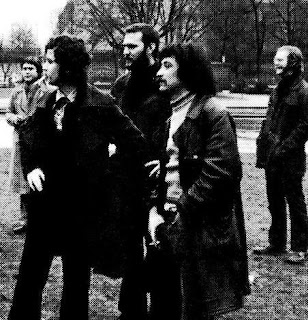 The Mothership Has Arrived!

White Hills is a neo-psychedelic/space rock band from New York. Formed out of the need to bring space rock into the modern era, the groups founder Dave W. originally started this as a solo project. As more members began to join in, the music has become more and more praised and highly regarded as a unique take on the style.
The sound of this album, and the band in general, is very groovy and trippy. Like most good space rock, the music is used to entrance the listener and it is constantly building. Waves of lush noise wash over the band as they play, giving this album a very retro feel to it. Besides your average first thought of Hawkwind being a main influence, you have plenty of Pink Floyd in here as well, like the solo in We Will Rise, as well as a bit of Mogwai within the way Three Quarters is played in an almost post-rock way.
The first track, Dead, really starts off the album on a rock based note. This track is more of a noisy rock track with elements of space rock and psychedelia sewn throughout it. It is not till the second track, Counting Sevens, starts that this entrancement really grabs you. Each track from here on flows together into a sequence of tracks that either pulls you in or pushes you out of this state.
For anyone that expects this to be a clean sounding record, production wise anyway, they'll only be about half right. This record could be a bit more dusty sounding for my taste, but they keep the retro vibe in their playing enough to still captivate the spirit of 70's space rock. Most of the guitar sounds are quiet and ambient, this could also be said of the synthesizers as well, allowing the vocals, bass, and drumming really capture the sound. Don't let this make you think that there is no distorted guitar parts, there are plenty, hear the end of Let The Right One In.
The two longer tracks on the album, Let The Right One In and Polvere Di Stelle, really capture the spirit of 70's space and psychedelic rock in perfection. These tracks build and crescendo like the shorter tracks do not, allowing them to be all the more captivating. The vocals on these tracks are much more like chants rather than singing.
Overall, this is a very cool record filled with entrancing moods and textures. Fans of the genre will most likely already at least know of this group, but if you haven't yet heard of them, check them out. This will probably not blow your mind, but it's a good listen that doesn't feel as long as it really is.
Overall Score: 7.5
Highlights: Three Quarters, Let The Right One In, Polvere Di Stelle
Posted by maskofgojira at 11:59 AM