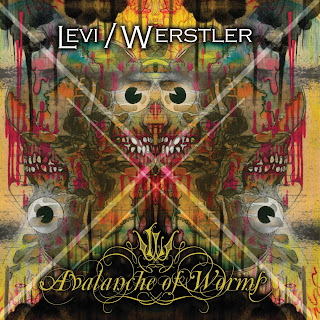 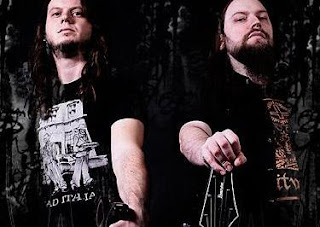 Levi/Werstler is the duel-solo release of DAATH guitarists Eyal Levi and Emil Werstler. Like one might expect from the idea of guitar solo albums, this is an instrumental record. Featuring melodic, yet progressive ideas that meld technical metal and progressive rock together into one album that sounds fluid is what you'll find within this album, basically.
This album is definitely what could be described as instrumental progressive metal. This album may not feature any long epics, but the duo themselves have stated that this entire album is meant to be a single piece of music. Each track kind of sounds separate from each other, yet simultaneously, is able to also move as a single track.
Many who know the duo's playing style in their main band, DAATH, may have some sort of preconceived idea as to what this album may sound like, if you haven't already heard the samples and released tracks already from their myspace page, and they won't be far off, but they will be wrong. As with most solo albums from guitar players, this album features a lot of shredding and masterfully crafted fretwork, but also makes use of repeating parts that make the song a bit less overwhelming to the casual listener. Melodies and patterns are catchy enough to actually get stuck in your head, listen to Dura Mater, and bring you to listen to this album over and over.
Another reason that some people may be checking this album out is due to the drummer that performs on here. Cynic's Sean Reinert plays drums on this album; and does so magnificently. His playing on here is a bit more "metal" based than the stuff he's done in Cynic or Aghora and it fits with the more prog-metal style presented to a listener on this record. Expect odd patterns as well as more traditional double-bass work, hear for a good example of what to find throughout the record. He even gets his own little drum solo on Trepanation and Bliss, before the track goes flamenco.
On here you'll find a lot of different styles of playing, which in the case of an instrumental prog record, is a good thing. You'll find your typical type of progressive track, Plague House, and then you have the more jazz-fusion inspired Trellis of Thorns. This sort of variety, as well as more obvious inklings towards their main project's sound, hear Obsidian Fissure, make this record all the more enjoyable and tolerable.
What makes this record stand out from all the other instrumental releases this year, is the sense of melody and precision that all the players on the album have in their craft. Song-writing is top notch and makes this album accessible, but also unique to all the other wanna-be solo guitar players. These two, along with other performers, make this progressive album stand out and also make this album stand up for repeat listens.
Overall, this is a very strong album, if not the best instrumental album this year so far. Fans of both guitarists, as well as the drummer, will most likely check this out on their own, but if you're not familiar with these guys yet, I recommend you check this out. Melodic prog and technical fusion, a small summary, but describes this album well enough in a few words.
Overall Score: 9
Highlights: Dura Mater, Loathsome Little Fiend, Architectural Necrosis, Casting The Molten Sea
Posted by maskofgojira at 3:59 PM