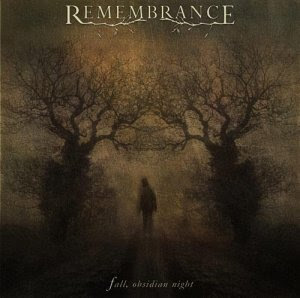 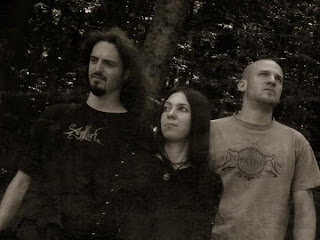 Cry Me A River.

Remembrance is a funeral doom/death metal band from France. This band has explored the more depressive and sorrowful side of the doom genre, but mixes it with the brutality of the death side. Making use of both vocalists on their albums has created a sound all their own.
For those unfamiliar with the trio's previous releases, they all have followed within the same vein, but a noticeable evolution and progression keeps things from getting stale. The trio is made up of Matthieu Sachs (guitars, vocals), Carline Van Roos (keyboards, bass, vocals, drum programming), and Norman Müller (drums). Though having a drummer and a drum programmer may seem absurd, the drums on this record are real and having two "drummers" has helped them to create some of the tempos and patterns for this, as well as previous, albums.
The vocals on this album are what one might expect from a funeral doom/death band. Matthieu's style is very low and guttural growls that are similar to those found within other funeral bands; Carline's are much more melodic sounding and is a nice counterpoint to Matthieu's. The two manage to make their vocals diverse enough that every song is a little different from the one that preceded it, to some extent.
The overall sound of the band is pretty much what one comes to expect from the funeral doom genre. Slow and melodic guitars, paced drumming, heavy bass, and symphonic keyboards. While all of this occurs in this album, the keyboards in particular stand out. Tracks like The Omen use them to great effect.
While nothing on this album is really groundbreaking, it does carry with it some excellent song writing. Songs are arranged and performed in a way that is perhaps a bit easier to listen to than other bands within the funeral doom genre. Tracks like Ice Cold Conscience carry with it a similar style to that of My Dying Bride's early work, which is some of the best death/doom released.
Overall, this is a solid album with good consistent sounding songs. This band really knows how to play funeral doom without sounding like everyone else, even though there's not a lot you really could do not to sound like another funeral doom band, these guys know how to pull it off. This album really shows exemplary use of slow tempos and melodic keys and guitars; if you're a fan of doom, you should invest some time into this album.
Overall Score: 8
Highlights: Stone Mirrors, Ice Cold Conscience, Winter Tides
Posted by maskofgojira at 4:52 PM