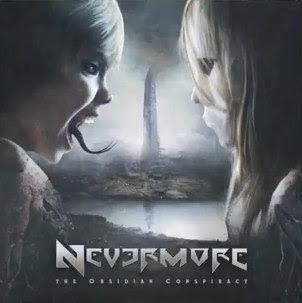 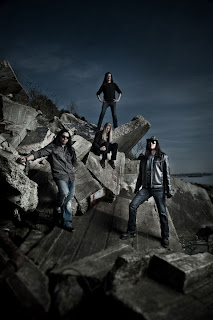 Nevermore is a progressive metal band from Seattle. This is their seventh full-length record, and the first released after 2005's "This Godless Endeavor." After vocalist Warrel Dane and guitarist Jeff Loomis releasing solo albums, the band has come together again to create another album.
This album features many shorter songs than on previous albums by Nevermore, but are no less fantastic. Guitarist Jeff Loomis mentioned that this album featured more of an open sound to allow Warrel more room for his vocals, and this proves itself to be true. A lot of these tracks are a bit more groovy and melodic and allows Warrel's vocals to soar over them.
While most of these songs are shorter than the last few record's have been, this album is perhaps Nevermore's most progressive since "The Politics of Ecstasy." This is a very diverse record, from the groovy and melodic Moonrise (Through Mirrors of Death) to the mellow and more acoustic based The Blue Marble and The New Soul. Songs express an almost rediscovery of sorts within tracks that move from section to section flawlessly and never seem to lose balance.
Warrel's vocals are unmatched on this record, ranging from his high operatics to the low spoken word, and even the few growls in here as well are well placed. It can be said that he always sounds passionate about what he's singing, a lot of vocalists nowadays don't have this sort of passion that translates so easily. The solo record he released has obviously been taken into account as his vocals on here are heavy used, even more so than even other Nevermore records, but are not overused.
Loomis' guitar playing is equally spot on. Like mentioned above, his guitar playing on this album is not as technical as previous records, but still has all the great solos and riffing. His playing seems to only get better with each album, and while, once again, his playing on here is a bit underplayed, he is still able to make use of all of the things that make him great, but without the showoff effect.
Without Morals demonstrate the perfect method that allows both Warrel and Loomis to shine equally on a track. This track seems to mix the groove, the melody, and the progressive attitude all together, and this is just in the guitars, with a soaring vocal hook. While this is just one track, this track, along with the few that follow it seem to be some of the best songs that Nevermore have ever produced.
Just to mention, this is probably the catchiest Nevermore album yet. Tracks like The Day You Built The Wall and And The Maiden Spoke feature some of the greatest hooks ever, while the title-track, The Obsidian Conspiracy, soars above all of them in terms of being catchy. While the riffs in The Termination Proclamation and She Comes In Colors are the highlights of those songs, the riffs and the vocals always seem to break the mold and work together to create some to the catchiest songs this year.
Overall, this record is not so much surprisingly good, as much as it is just another notch in the headboard of Nevermore's equally great collection of albums. This is an album that fans of the band will enjoy as well as those who have probably never heard the band before as well. This is another album that makes this year all the greater for metal albums, just another album that everyone has to hear. Check this out.
Overall Score: 9.5
Highlights: Every Song Is A Highlight
Posted by maskofgojira at 9:50 PM