An Autumn For Crippled Children - Lost 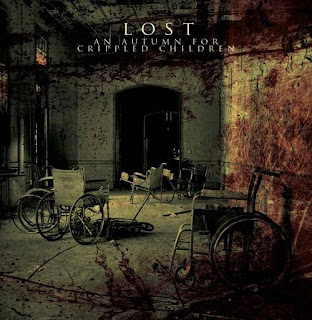 They Screamed, But No One Came.

AAFCC is an experimental black metal band from the Netherlands. This is the trio's debut album, coming from no other bands, or at least any that are known about, these three weave in and out of genres to make this a unique sounding debut. Combining depressive and melancholic atmospheres with more blackened doom structures makes this band a difficult, but rewarding album to listen to.
The sound that this band has been described as having is a mix between black metal, doom metal, and post-rock. All of these are on this record, no problems, but the way they are played in conjunction with each other is different, considering that many have labeled this group as being more in the depressive black metal sound. One could certainly trace certain elements of the band's sound back to that style, but if you're familiar with these groups, you could see them having more in common with groups like Katatonia, Anaal Nathrakh, or Lifelover.
The overall vibe includes a rather clear sound, where everything is heard without much trouble, but still has a very black metal sound as well. Noise litters this record, hence the Anaal Nathrakh comparison, but a lot of it comes from the guitars. Lifelover comes into play with the very shoegaze/post-punk melodies that are fluent in these songs, hear Tragedy Bleed All Over The Place. The Katatonia reference should be perfectly clear with the very ambient wall of sound that comes into play when the band decide to mellow themselves out.
Despite being labeled by some as a depressive black metal band, despite the influence that it does have on here, this band is much more "progressive/experimental" than most of those bands ever showcase in any of their music. The band-track, An Autumn For Crippled Children, on here has some of the most beautifully melancholic piano work on a record this year. The band also frequently make use of acoustic guitars and more simplistic melodies in their quieter moments that most bands in the above genre rarely ever use. Another thing that separates this trio from that style is the lack of monotony in their music; most bands from the DBM scene can repeat one part for minutes or entire songs before changing, these guys manage to change parts repeatedly, but not in the math metal way, just in case anyone might have thought that.
Despite what anyone, including myself, thinks of the name that this band has chosen, it actually is fitting for their music. Certain moments evoke or conjure up images of these paralyzed children in pain, as disturbing as this might be, in your head, listen to I Beg Thee Not to Spare Me. Just the idea of this will probably turn a lot of people off, but those who do take the opportunity to listen will find that the music is actually good.
Overall, this is a very good album with a lot of twists and turns that many wouldn't expect from a band with this name. If you've been looking for a band that is progressive and experimental, yet still underground, this is something you should consider checking out. Based on the name, this group probably won't get that big, but their talent for crafting a unique and creative sound is something that should be praised. Check these guys out.
Overall Score: 8.5
Highlights: A Dire Faith, In Moonlight Blood Is Black, Never Shall Be Again
Posted by maskofgojira at 3:50 PM