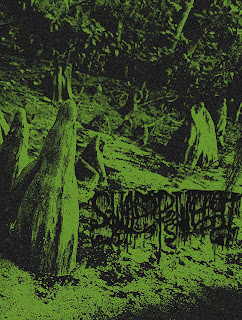 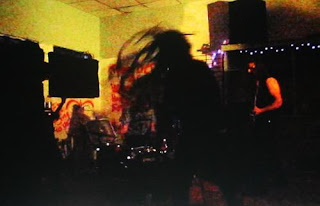 I've known about this EP for a couple of months already, thanks to numerous sites giving it praises, but kind of decided to let it be. It wasn't until I was sent a copy, and I actually listened to it, that I decided it was worth covering this late in the game. I'm not one to just post something bad that was released earlier this late in the year.
In the praises sung for this release, there was mention of recalling the likes of classic death/doom, like the Peaceville three. Now, I'm not a Paradise Lost fan, but comparing anything to the likes of My Dying Bride, and to an extent older Anathema, will immediately get me going. Unfortunately, I hear very little of that in here, what's on here is much more thick and muddy, that's meant in a good way though, and the vocals don't hint towards more romanticism and beauty/morbidity contrasts. This three song release contains a much more vile sense of self, with lumbering and droning riffs that just provide a backdrop for some of the most indistinguishable vocals I've heard in a long time, I seriously couldn't make out a single work. It's a disgusting piece of work that made me feel like I needed to take a shower after I was done listening to it.
It's a very solid release that should get fans of the genre pretty excited to hear it. It's not a masterpiece, considering how short it actually is, but does leave an impression after listening. Definitely check this out if you don't mind more disgusting doom metal.
Overall Score: 7.5
Highlights: Gnosis
Posted by maskofgojira at 2:41 PM