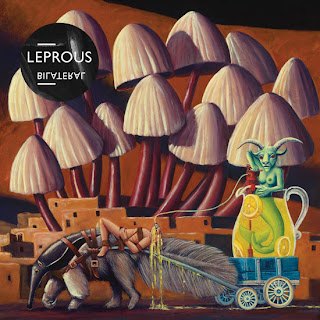 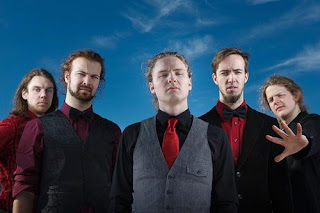 Leprous have been gaining more and more attention since the release of their last album, 2009's "Tall Poppy Syndrome," and for being Ihsahn's backing band. I can still recall finding the band in a review where they were compared to Opeth, of course I was going to listen to them. Listening to them from that point on, I was looking forward to seeing how they progressed.
Now, I'll start this off in an odd way, I'm sure, like me, if you heard their last album, and you're reading that opening statement going, "Who said they sounded like Opeth," because it sounded almost nothing like them, I realized that soon after listening to it for the first time, and I can safely say that this one is even farther from anything Opeth has done. Sure, their albums are progressive, it's a prog-metal band, but that's basically the only relation, and this album really is pretty far removed from what could be considered an Opeth-esque sound. What's on here is pure prog-metal, the opening title-track Bilateral is about as far as you can get from ninety percent of prog-metal in general, with its harmonized choir chorus, weird riffing, and fantastic drumming, expect pure prog. Beyond that, you can definitely hear traces of certain influences on here, but you can't really say these guys sound like any other band on here, it's actually a breath of fresh air for prog on here, because it is very different from anyone else.
There is some great playing on here, on all fronts, from the vocals to the drumming to the bass work, it's all very impressive. This record also contains that certain quality that I just love about progressive music, the quirky, almost silly sounding, moments. It's in songs like Restless or Mediocrity Wins where the band just seem to be having a blast playing weird melodies with over the top vocals that I just get so much more out it than usual. Maybe it's my love for all things Mike Patton does that I can find so much to love about a band being off the wall, where a song like Waste of Air could seem almost childish, if you get what I mean, that I could instantly find the rhythms catchy. In addition to all that, all the songs on here are really well crafted, they're adventurous but also very catchy and memorable. I'm sure it's agreeable that if a record goes by fast that you obviously enjoy it, well this thing went by very quickly, I was surprised by how fast the ten minute Forced Entry went by without ever growing dull or boring in the least.
This is a very good album with a lot of variety and tons of potential, it should really offer something to any fan of progressive music. There really isn't a whole lot to pick on this for, it's very well constructed, written, performed, and produced, all around it's very good. If you like progressive music, definitely look into this album, I don't see any reason why you couldn't find something to like on here.
Overall Score: 9
Highlights: Forced Entry, Waste of Air, Painful Detour
Posted by maskofgojira at 8:24 AM