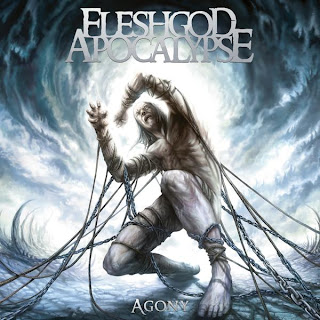 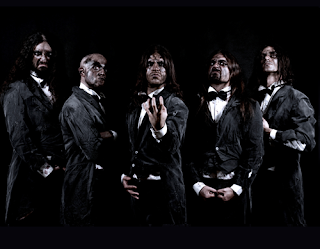 I'm sure that by now if you've been paying attention at all to death metal you'll know about Fleshgod Apocalypse. The quartet, now quintet, started off in 2007, got quite a bit of hype and exposure from their first full-length, "Oracles," and released the "Mafia" EP last year. This new album comes with a lot of baggage, considering I actually liked those releases, which is pretty rare that I actually find a modern death metal band that I actually enjoy enough to play their album more than once.
In all honesty, I was not sure what to expect from this coming into it. Before actually putting it on I had heard everything from this being a top contender for album of the year to being a total let down, and to be honest, I was leaning more towards the latter. The video for The Violation didn't really impress me too much and I thought it was over orchestrated. I thought that that track was pretty boring and didn't really do anything that was worth while, it had a lot of synthe on it, the riffs and vocal lines weren't all that memorable, and the clean vocals stretched into almost cartoon territory with how high they were going.
Unfortunately, all of these traits carried onto the rest of the album. Now, I'm all for orchestration, whether it's real of synthesized, I think there are bands who pull them off really well, but this was just over orchestrated in my opinion. Really, I could care less whether it's a real orchestra or just a keyboard, but most of the orchestral sounds on here just sound like they were added onto the music after the band had written everything else, which makes me feel that I probably would have liked this album more without all the synthe. It's not even that I feel the synthe parts are bad, but they don't feel compatible with what the rest of the band are doing most of the time. Then there's the riffs. I don't expect a whole lot of memorable riffs when it comes from the tech-death scene, in all honesty, cause a lot of good bands fail at being memorable, so I can't say that this was a disappointment for me on that level. Finally the vocals. Growling, it's solid, and I like how most of it is done in a very rapid fire-esque delivery, but the clean vocals are where my patience began to wear thin. Paolo Rossi's clean vocals were great on the "Mafia" EP, I don't know why he felt the need to try and go all operatic and high on here where he just starts to sound like a cartoon with how high he's trying to go; and I'm not a fan of how his voice apparently cracks during the chorus of The Deceit, which was otherwise a pretty good track. But not everything on here is a train wreck. Francesco Paoli is a beast behind the kit, as he's blasting for a good portion of this album and makes it sound so effortless. In addition to that, there are some tracks on here that are more well constructed, on all fronts, The Betrayal is a solid slab of symphonic death metal and is easily one of the better songs on here; and I will say that most of the better tracks lie on the second half of the album.
I don't know about this one, I enjoyed their last two releases for what they were but this is just a bummer. The mix on here is totally messed up and the clean vocals are just terrible for the most part on here, but the instrumentation is still done quite well. Check it out if you're a fan of them already or if you're into more classical and symphonic metal, but it's not an essential album for this year.
Overall Score: 6
Highlights: The Egoism, The Betrayal, The Forsaking
Posted by maskofgojira at 10:19 AM