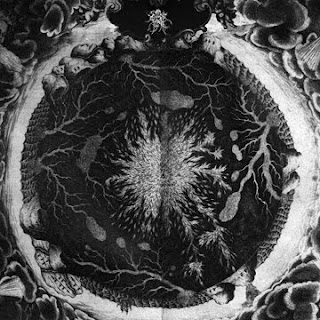 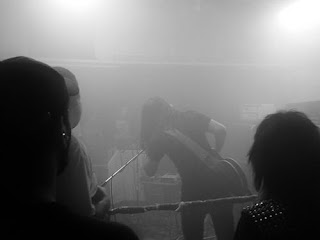 Sutekh Hexen are a duo that I've largely ignored in the black metal, or black noise, scene until recently. Until listening to one of their demos, I was quite indifferent to them, having lived in blissful ignorance and never listened to them beforehand, I was quite taken with them. This release is their longest to date, topping their usual ten minute mark per release.
Sutekh Hexen is a duo that never shows mercy to anyone in music, it's raw, intense, and sonically very brutal. Layers of harsh noise cover up intense black metal that just melds together, on here, more fully than on their previous demos. This is, for me, the most black metal I've heard the band at, don't hate on me for not having heard some of their 7's yet, they're coming. The riffs and production are a lot clearer, which allows a lot of the different sounds to be pulled apart easier. Despite being a black noise, or raw black metal, or whatever band, this album still makes use of more than noise and with the clearer production, I found that songs proved to be a lot more memorable and graspable rather than just overwhelming.
A truly engulfing experience where the noise just encompasses you, I've truly not heard something this encapsulating in quite a while. I love how intense and in-your-face their stuff is most of the time, but on here, In Worship, They Weep His Name for example, the whole song dies down into a very minimal riff or noise at certain points and just makes the thing that much more intense. I also found that it enhanced the entire record because it allowed the music to pull back before hitting you in the face again, it wasn't a continual beat down, there were intermissions between the beatings. I also appreciate how some of these songs make use of more ideas than other releases, like the spoken word that opens up Serpents for example. Really the only complaint I have to say about this is that there wasn't more on here, granted, six songs on a single release is the most the band has done yet, but I can still dream of a day when they might release a full-length album with ten or twelve songs.
I really hope the band decide to release an album full of songs, which from what I hear is hopefully coming out before the end of the year (fingers crossed). The more stuff I hear from these guys, the better they get and the more I get into them. Definitely look out for this band, and try and find any of their stuff, it's all good from what I've heard thus far.
Overall Score: 9
Highlights: The Great Whore, Seraph
Posted by maskofgojira at 10:23 AM