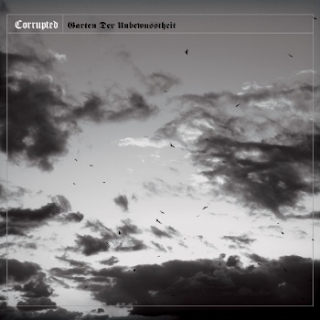 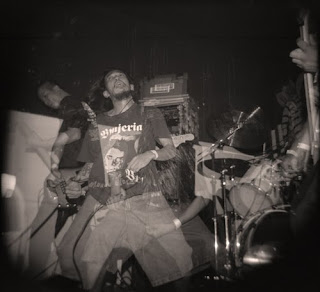 I haven't listened to these guys in years before finding this album, a good two to three years or so. Great band, really long songs, it was during a period where I was listening to a lot of funeral doom acts and first discovering drone music so I was heavily into this stuff, then I got into other stuff. Now, something like five or six years after their last album, "El Mundo Frio," we finally have this one.
Known for their extremely crushing sense of guitar riffs and drones, that's pretty much what I expected from this album, in the beginning anyway. It wasn't until a friend of mine, a mister Rosenthal, had been raving about how great this thing was and compared it to the great Godspeed You! Black Emperor that my interest was finally peaked. So what do you get, it's like post-funeral doom, if you can imagine that, extremely slow and drawn out, but with just as much emphasis on cleaner and more atmospheric passages as, if not more so than, heavy and crushing riffs. Perhaps more post-rock and ambient than any of their older material, it's still a metal record, and one that is actually a lot more intriguing and emotionally investing than most post-metal records this year. This also builds and builds in a way that definitely brings that GY!BE comparison into the light, as both make use of extremely long songs, but the payoff is always worth it, two of these three songs are around the thirty minute mark.
It's hard to say what exactly makes a record like this so great and interesting to listen to over and over again. With songs so long, you'd think that it's get dull after a while, especially if you're not a typical fan of the drone and funeral doom genres, but this does it with applause. Even for as slow as they are, and this really applies for most of the band's discography, a melody is always present, and it has always been memorable, no matter how long it takes. The acoustic moments that are used throughout the album are beautiful and cold at once, but provide a great calming sense and breather in between the more crushing doom moments. Besides that, none of these songs feel all that long to begin with, album closer Gekkou No Daichi just tops half an hour and doesn't feel that long in the least. With all the different atmospheres and noises that are weaved into this record, moving in and out, it's impossible not to find something of merit on here. I really can't think of another funeral doom record that has blown me away this much since I first started listening to the genre several years ago.
This record blew away pretty much any preconceived notions I might have had coming into it and pretty much blew me away with them. This album stands on its own in the band's discography but still manages to hold its own with their previous work. Definitely check this out, if you don't like funeral doom or drone doom, this could be your gateway drug.
Overall Score: 9
Highlights: Gekkou No Daichi
Posted by maskofgojira at 10:08 AM