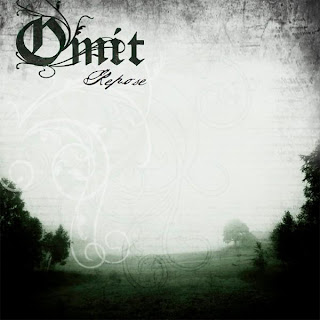 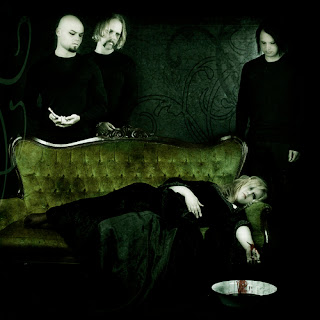 Omit is a group that I've only recently been turned onto by a couple of friends of mine who have had nothing but good things to say about this album. I'm sure I've said sometime in the past that I'm not a huge fan when it comes to female fronted metal groups, but they both said that vocalist Cecilie Langlie was actually very good on here. Cecilie isn't a stranger to metal so I was open to hearing this album even if it was female fronted.
As someone who grew up with a lot of gothic and power metal groups being played in the house, I've grown quite familiar with the sounds from those scenes, and thus my eventual distaste for them grew as well. In the years where I looked outward and began listening to more extreme metal, I grew more and more bored with vocalists who were indistinguishable from each other in those scenes which eventually led me to pretty much leave the power and gothic metal genres behind me. Now, the likes of doom metal has always had at least minor roles for women as lead vocalists, and even in my exploration of extreme metal, I found myself liking certain vocalists more than others, and the ones I liked did usually come from the doom scene, not the death metal, Arch Enemy, or black metal, Astarte. What always struck me was how a lot of the women vocalists in this genre could brought what I considered to be actual depth to the music with their voices, it wasn't just someone screaming over the top of heavy riffs or a contrast to someone else who was screaming, it felt more genuine. It works in the band's favor that Cecilie Langlie actually has a voice that I can not only tolerate, but actually enjoy listening to. Her tone isn't too operatic or over-the-top but manages to kind of go the middle ground between the two.
As for the actual music on here, one could say that it kind of blends semi-traditional doom with more symphonic and gothic elements. The fusion of these sounds, to anyone who's listened to any female fronted doom band before, isn't anything new, it's been done in the past numerous times, but I think it's through the use of real orchestration, real strings and not just keyboards, that makes this album so much more successful in it's endeavors. While the music itself, if taken out of the whole, isn't anything too fantastic, but it's when you have those low and heavy, dirging riffs accompanied with the strings and Cecilie's voice that brings that air of a misty area to mind, for me anyway. It's a slightly dreamy, not so much ethereal, but extremely atmospheric and beautiful, but, obviously, with a darker tone thanks to the more metallic bits.
A beautiful record, one of the most I've probably heard all year actually, and definitely worthy of all the praise I've heard of it. It's a bit lengthy in spots, it is a double-album mind you, but it never felt all that long. Definitely look into this if you like more atmospheric doom or gothic metal, with a vocalist that isn't annoying and actually sounds unique.
Overall Score: 9
Highlights: Fatigue, Constriction
Posted by maskofgojira at 6:25 AM