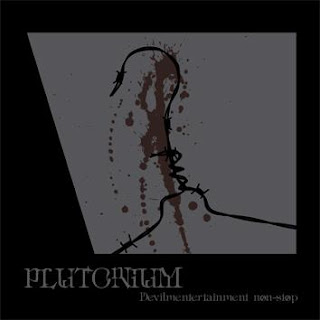 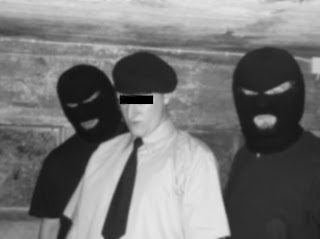 In terms of the whole industrial black metal scene, whatever scene there is anymore, Plutonium is a group that really hasn't been covered all that often. There really isn't a whole lot out there about Plutonium, you can find it, but it's pretty limited. When I was actually emailed about this, it gave me a reason to look back into this band after several years of absence from my play lists.
Plutonium, strangely enough hailing from Sweden and not the normal Norway or Germany, brings a very familiar sound to the table. Their debut carried on traits that can be heard in the likes of bands like Thorns or Dødheimsgard, but this new album kind of pushes a little more into their own realms of avant-garde. You'll find moments where very experimental electronics come into the picture and just take over any sort of metal influence, but then you also have tracks which are much more straightforward and driving. My personal favorite is when the band go down the middle road and do something that's still very rooted in their black metal sound, but still is a bit more dissonant and left of center, Unintelligent Design for example. About half of this album leans into the more avant-garde side of black metal, the other half is more direct and doesn't really tread a whole lot of new territory, not to say it's bad in anyway, cause those are most likely the songs you will remember the easiest.
This album is a bit more raw than their debut. The guitars are much more fuzzed-out and distorted, but still provide the sort of trademark black metal melodies any fan should be accustomed to. It's not too out of the ordinary in terms of riffing, it's more the construction of the full song that impresses me on here, the complete picture in this case is more than the sum of it's parts. At times, you'll find a bit of the Satyricon vibe going on in here, very straightforward, melodic, a little cheesy sounding black metal, The Misery King for example sounds like it could've been taken off of the most recent Satyricon albums. I really have to compliment the bass playing on here, while it's not super technical or all that unique, it definitely stands out in the mix and adds a different flavor to the record every now and then.
Though I'm preferable to avant-garde and experimental black metal in general, I enjoyed this a lot more than I anticipated. I think some of the ideas could have been smoothed out a little bit more, but for the most part this is a very enjoyable listen. I'd definitely recommend this to anyone that like the industrial and experimental side of black metal.
Overall Score: 8
Highlights: Devilmentertainment Non-Stop, Unintelligent Design, Zero Swarm
Posted by maskofgojira at 11:12 AM