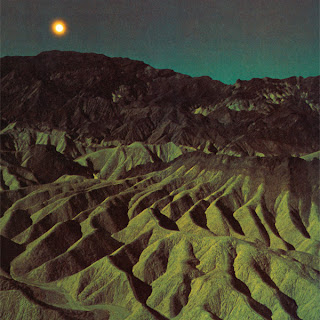 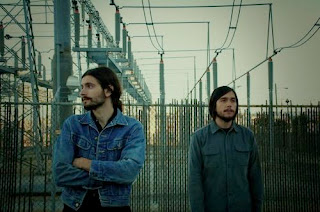 California's favorite drone duo have returned with another new release this year, following up the "Shadowland" EP they released a couple of months back. It seems weird to me since I only got into these guys maybe four or five months ago and now I'm covering one of their albums. They're probably one of the more interesting drone groups I've come across.
Now, what can I say about this California duo that best sums up their sound, it certainly is based in a lot of drone, but you can't deny the post-rock-ish side of them as well as their very engaging psychedelic trips into the unknown. There are a whole slew of names and tags you could attach to these guys but I've found that the term desert drone is really applicable here. Despite all its dreamy atmospheres and beautiful build-ups, all of it feels very natural and open and dry sounding, and it really paints pictures of long stretches of sand and rocky pillars while listening. Even at its bleakest moments, The Darkest Night Since 1683, there still manages to be quite the introspective atmosphere, painting a much darker image but still one of beauty. It's in a record like this, where the music portrays such beauty in the bleakness of night and environments like the desert that just make music like this worth searching for.
I can certainly see that the solo albums that both Evan Caminiti and Jon Porras released this year had some impact on how this album came out. Perhaps more post-rock and psychedelic than some of their last couple of releases, but the drone element certainly is still inside the album. The album is definitely a lot more graspable than their EP simply because of the more prominent guitar parts used on here, not to say this album is completely devoid of it's more pure ambient and drone moments, the Pink Floyd-ish Light Echoes for example. This album also contains some of the duos best work in the folk department in their career, as I found the likes of Temple of The Winds to be absolutely enchanting. The mixture of ambient, drone, folk, and psychedelic music on here just hit the right chord with me, and I seriously can't stop spinning this thing. The beauty of the ambiances and the haunting melodies from the guitars just put me in a place that very few records have managed to do, ever, let alone this year.
It's hard to really say this is my favorite since it is the most recent, but so far I'm loving this thing to death. It's rare that I find an album based in drone and folk music that I actually enjoy as much as this one, but this one has just checked all the right boxes for me and it's honestly surprising that I have as much of a connection to this as I have. Definitely, definitely, look into this album, it's really good stuff that should not be ignored.
Overall Score: 9.5
Highlights: Every Song Is A Highlight
Posted by maskofgojira at 8:51 AM