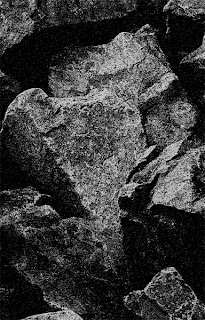 Sascha Mandler apparently has a lot going on, as he's doing a lot of different projects. This debut from this project and while I had never heard any of Mandler's other projects, it looked interesting enough. Noise is something that can be hard to really pinpoint so I really wasn't sure what I was gonna get from this.
It took a second, but when this thing opened up with The Third Will Be The Last it made me jump a little, even though I was expecting it. Now, what's weird about this tape is that despite the fact Mandler comes from the Germany, as far as I know anyway, this album sound Japanese. The way the vocals are distorted and morphed with effects, and even Mandler's tone, make it sound like it's part of the whole japanoise scene. Now, it's not as brutal or intense as I imagined it would be, because the vocals are on the very top and not the noise, it did feel a lot less aggressive, even if the noise and drones behind him were.
In my opinion, this tape had a bit more of an industrial vibe to it, along with the noise and drone stuff. I haven't listened to a whole lot of stuff that's power electronics, I'm more familiar with straight-up noise, so forgive me if that's a given in the sub-genre, but that's what it sounded like. There's also a pervasive ambiance hiding in the background of every song on here, which I thought enhanced the tape for me, cause things were changing in the background if the noise in the foreground remained intense. The second half of the tape really exemplified this, with opener Power Void being much more ambient and droning than pretty much any other track on here.
It's an interesting release, it's not bad, far from it, but I wouldn't say that the real sound of this project has been honed in on as of yet. Sure, it's noise, but I feel that a real core hasn't been defined. Check it out if you like noise, power electronics, or even dark ambient to an extent, I don't think you'll be disappointed.
Overall Score: 7
Highlights: Digital Confinement, If You Want to See A Picture of The Future
Posted by maskofgojira at 8:56 AM