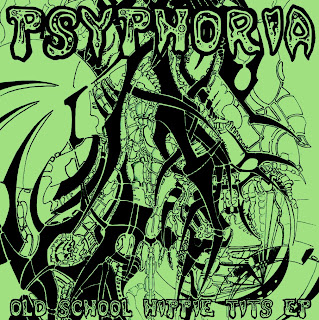 This debut demo/EP from the drummer of Humanity Falls was sent to me from the man himself, digitally. Though I was pretty luke-warm towards their full-length, I still was open towards it. Based on the title alone, I can't say I that this really would have intrigued me otherwise.
Well, I'll be blunt, this really underwhelmed me. There are a lot of problems with this release, so I'll start with the most obvious one first, the production. Now, anyone who's listened to underground grindcore or the genre's pioneers in their early days will know that the genre has never had to be polished to be good, but this just sounded very flat and dull, nothing stuck out to me. When the intensity was building, it sounded the exact same as when a groove was broken in, Thanks For The Cake, Asshole. Then there's the vocals, which probably are the best thing on here, but it seriously sounds like someone recorded all the music, mixed and mastered it, and then recorded the vocals and just put them at the very top, making sound very separate from each other, in my opinion. Then the drums, which, for about half the time this record is on, sound like trash cans rather than a drumset. This was very disappointing, because the music does have some interesting ideas now and then, but for the most part it sounds sloppy, Elixer, and uninspired.
I know this came off pessimistic and really negative, but after the rather lukewarm response towards Humanity Falls, which for all it's flaws, had some decent ideas and songs, this just falls flat on it's face in comparison. There really wasn't anything on here that made me want to return to it after the initial couple of listens for the review. If you like grindcore or sloppy death metal, go ahead and check it out but otherwise I'd stay away from this.
Overall Score: 2
Highlights: Of All Our Inbred Leaders, You're My Favorite, Bitch Metal
Posted by maskofgojira at 6:10 AM