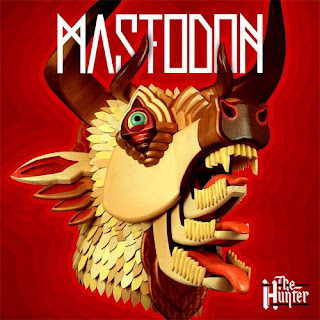 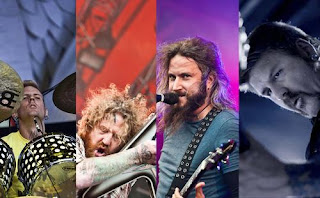 Like thousands of others, I was awaiting this new Mastodon album like a little kid waits for Christmas morning. Among hearing those three "singles" that were released prior to the album, tension was mounting as the release date grew nearer and nearer. After what has been widely considered their best release with 2009's "Crack The Skye," we get a new album with a fresh perspective.
So, unlike the four previous albums that came before it, "The Hunter" shows Mastodon writing an album of songs rather than an album based around a concept. Filled with thirteen rather short tracks, this album doesn't linger on a single idea all that long, which may turn some off, but this is an album that is all about good songs without pretension. Now, what you have here, sonically, are songs that vary from progressive stoner rock songs that bring to mind the likes of Queens of The Stone Age, Curl of The Burl or Bedazzled Fingernails, to almost Devin Townsend-esque epic atmospheres, Stargasm. Granted, these are only comparisons that I hear, you might hear something different; and, of course, Mastodon end up sounding like no one else. The two longest tracks on here, the title-track, The Hunter, and The Sparrow, are both more laid-back tracks that bring back a bit more of the "Crack The Skye" kind of vibe than other songs, but manage to probably be the most hypnotic in their performance. Granted, I'll obviously say that the entire album still maintains that psychedelic/progressive vibe from the last two albums.
Obviously, the vocals on here have vastly improved, since their last album as well, with a lot more harmony and catchy melodies being present throughout. While Troy Sanders and Brent Hinds still carry the vocals for the majority of the album, Brann Dailor takes the lead on more than one occasion on here providing lead vocals, Dry Bone Valley. The combination not only leads to quite a variety in terms of vocals but also in harmony, you'll find big choruses that make use of pretty much every member of the band singing. I know there are those who wish the band would just go back to shouting/growling of their first couple of albums (even if you're not one of them, you know they're out there), but you have to at least be impressed with how each of the members has grown as a vocalist.
Unlike some other albums that came out this year, I already had a preconceived notion that this album would be great, and it is. There was really only one song that I didn't really care for too much, but when every other song is just fantastically written and performed I can kind of look over that one to hear the album as a whole. It's Mastodon, check it out if you haven't already been acquainted with them yet.
Overall Score: 9
Highlights: Stargasm, Creature Lives, The Sparrow
Posted by maskofgojira at 7:48 AM