Eyeconoclast - Sharpening Our Blades On The Mainstream EP (2011) 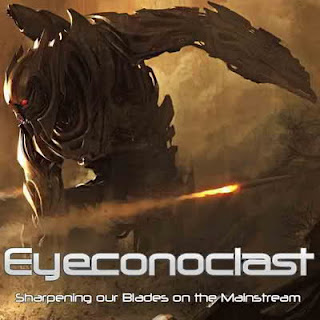 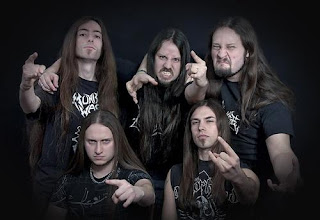 Who can deny a cover like that on an EP. Sure, it's a little cheesy, but in all honesty I still think it's pretty cool looking. This is actually the first release from this band that I've listened to so I was hoping for something musically just as cool as the cover.
This thing holds no punches as the title-track just launched straight into a more technical thrash riff. It's one of those things where it took a second to really register with me to realize what just happened. The entire record really made me do a double-take because it just sped by so quickly that it felt like I had listened to one song. Obviously beyond the first listen a listener could really feel out more than just that, and more listens revealed a better sense of songwriting and some nice riffs. I'm not the biggest fan of the death/thrash sound, but what these guys are doing is well done and quite good, with only three songs it didn't wear on me at all and just sort of sped by. All three of these songs has it's own sort of trait that makes it distinguishable from the others, but all of them are quite fast, which is probably my only complaint, I kind of wish the band might have slowed down for just a few seconds, but with only three songs, one could hardly say that that's needed on here.
This is a solid EP of melodic, thrashy death metal that should please any fans of melo-death. What you get with this isn't overly flashy or original, but it's performed and written strong enough that that isn't really a necessity. Check it out if you like more thrashy melo-death.
Overall Score: 7.5
Highlights: Anoxic Waters
Posted by maskofgojira at 11:51 AM