Nightbringer - Hierophany of The Open Grave (2011) 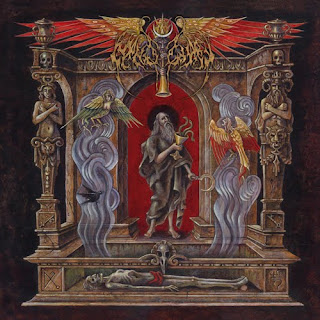 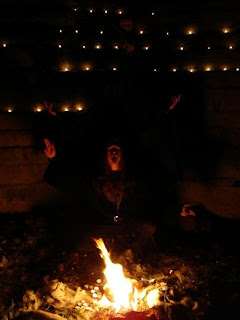 I'll be honest and say that I ignored this band until earlier this year. Last year, their album, "Apocalypse Sun," got a lot of praise from various sources. I had heard a lot of praise from friends and acquaintances on that one in particular, so I decided to actually give this one a chance.
Now, it's not like I'm coming into this totally fresh, I've listened to the band's older material before taking in this new one. This album retains the band's signature style of playing from previous releases, but heightens them to a point on here. The usual idea of tons of reverb so we can sound all ominous and big doesn't really apply on here, even if I believe it is certainly working to their advantage, all the atmosphere on here simply adds to their Wagner-esque take on black metal. The comparison to Deathspell Omega has been applied to this record, and while I don't hear a lot of them, there are some similarities in building tension, an almost chaotic take on melody, and an utter disregard for all things traditional.
Personally, although I had imagined liking this album a lot, especially after hearing Lucifer Trismegistus for the first time, I did not expect it to blow me away like it did. I'm sure if you're a black metal fan, you've had experiences with the whole symphonic black metal genre, it's no secret, but this band trumps pretty much every symphonic black metal, or symphonic metal in general if you prefer, band I've ever heard. Without ever making use of any of the orchestral keys, or a real orchestra, these guys have seemingly created a totally new take on the genre, or symphonic black or black metal in general. I've never heard a black metal band manage to really capture the epicness and grandiose nature of classical and orchestral music in their sound without using any cheesy synthes or actual classical instrumentation, but these guys have done it. It's atmosphere is encompassing and at times claustrophobic, but always shifting and moving. There's just so much going on beyond the typical black metal assault that early songs like Eater of The Black Lead may lead you to believe after an initial listen.
Amazing album, one of the best black metal albums to come out this year in my opinion. This is definitely a game changer for black metal, it shows symphonic bands how it's done and trve bands how to really capture atmosphere. Definitely check this out, one of the best black metal albums to come out this year.
Overall Score: 9.5
Highlights: Every Song Is A Highlight
Posted by maskofgojira at 8:18 AM