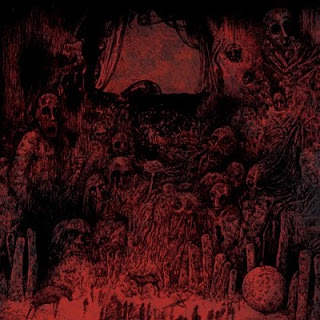 This debut album comes from a pretty unknown band with almost nothing known about them. Since you won't be able to just google their name and find a myspace or facebook page, you pretty much have only the music to go on. Small descriptions are on the internet, but nothing really substantial enough to really give you a definitive idea as to what this sounds like, hopefully this does that.
Besides the fact that I was told this was a black metal album, sonically, I was pretty in the dark to this one. For some reason, someone had mentioned funeral doom in their description of the album, to which I thought would be interesting, but unfortunately is not what I expected it to be. For the most part, this is a straightforward, more melodically inclined at times, black metal album that ventures into more doom oriented territory on a few tracks. The biggest occasion being the centerpiece and title-track of the album, Orbis Tertius, which is pretty much the epitome of what someone could call a blackened doom metal song, it's slow and brooding, but the atmosphere remains dense and heavy with snarled vocal. Not to say this record doesn't have it's more odd moments either, with Into The Gates of Madness definitely hinting towards a little bit of Blut Aus Nord, just a little, in it's more abstract riffing.
What kind of made me listen a bit closer to this album was the atmosphere that surrounded each of these tracks. Perhaps it is what led the person who wrote the description for the album that I went off of to say it was funeral doom inspired, but it sounds oddly enough like something I might have heard off of a late 90's atmospheric black metal record. While I don't think it's in the same league as bands like Lunar Aurora or Trist (Ger), the subtle nods towards their more epic sense of atmosphere can definitely be heard in here. The more raw style of production on here definitely recaptures a bit more of that mood where atmosphere shines through the aggression that a lot cleaner produced albums do tend to lack. Now, I hate to say this, and I know a lot of people are going to hate hearing this, but the ending of Emptiness Under The Moon, for me, recalls a bit of that blackgaze sound where a tremolo picked guitar ends up sounding a bit post-rock, if you will, and while I won't say it's an influence, that's what it honestly sounded like to me.
I wasn't sure what I get out of this, but it's quite the album and I found myself constantly, and consistently, impressed by it. It's an interesting journey among the five tracks that is definitely a bold statement for a new band, and I really enjoyed it. I would definitely recommend this if you like more atmospheric and doomy black metal with a foot in the stranger side.
Overall Score: 8.5
Highlights: Into The Gates of Madness, By His Unflinching Hand
Posted by maskofgojira at 9:50 AM