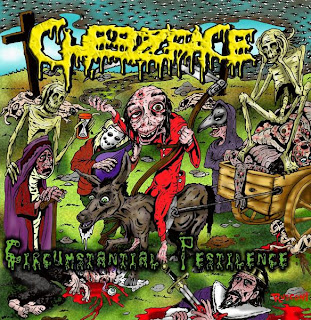 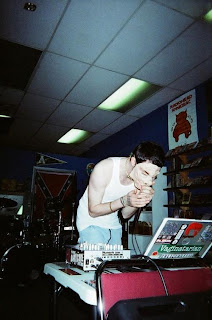 The fourth full-length from this North Carolina native noise maker surprised me, I didn't know he released anything before this. In all honesty, if I hadn't been sent this album, chances are that I wouldn't have paid any attention to it, because I'm not a huge fan of the artwork. Musically, the different styles that accompany this name did intrigue me.
Stylistically, the description goes through everything from breakbeat and electronic music to grindcore and drone music. As you can imagine, one of these alone is usually enough for a single band/project, but combining them all into one can get a bit out of hand. When it comes to this record, it just jumps all over the place, granted, electronics seem to be the most consistent element found on here, in the use of beats and noises, there are tracks on here that are straight electronic pieces, Doing Blow With Foghorn Leghorn. Personally, the use of grind and straight-up noise was interesting, most songs on here are so short that they rarely left any sort of impact, most are under two minutes, but I would have liked to have heard it go a bit farther. But by far my favorite moments on here was when it started diving into jazz, which I found to be really well executed throughout. I also found the little traces of ambient music found in the last few tracks of the album, Ultra Violence In The House of Chord, to add an interesting flavor into the mix, which I enjoyed I should add.
Now, I'll be honest, the reason I have reservations about this project's cover is because it looks like something I would have seen come from a porno-grind band, and that's a genre that I'm just not a fan of. That genre makes use of quite a bit of samples, which, unfortunately, are found on here as well, and these are samples that reference sex, misogyny, and other sexual and/or otherwise suggestible things and I just find them incredibly stupid and I feel they detract from the overall feel of a song. But seeing as I can't do anything about them being on here, all I'll say is that they didn't do anything for me and I found them annoying.
It's decent, that's about it, but then again it's not really a style that I typically enjoy. For what it is, I could see people enjoying it a lot more than me, but I didn't really get into most of what was on here, mainly because it was so short. Check it out if you like really experimental and avant-garde oriented electronic music, but to me, this is really for a niche audience.
Overall Score: 6.5
Highlights: The Tokyo Sandblaster, Let Them Eat Urinal Cake, Syntax Error Remix
Posted by maskofgojira at 7:33 AM