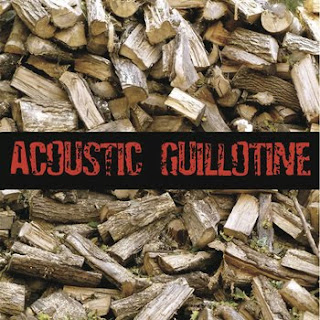 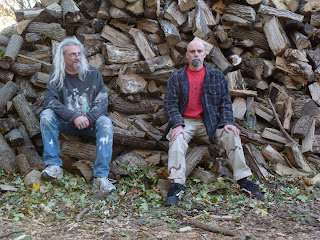 Looking at this picture, I'm sure you probably could have guessed what style of music these two dudes played. It's not surprising that these two dudes look like what they play, stoners and sludge fiends from birth till death. This Iowan duo sent me their album, which has been out for over six months already, asking me to review it and I was game for it.
With only drums, bass, and vocals, you can almost imagine how this is going to come out sounding. It's raw, pretty straightforward, and groovy sounding sludge rock, and that's pretty much it. There are points on here when the duo do tread a bit more into the doomier side of things, but even then, it never really feels as heavy or crushing as doom metal without the guitars. I mean, for what it's worth, both instruments are played well, the drums are nice and bring a nice amount of groove to the duo's sound, but I found the kick to be a bit too clicky for the raw sound on here. The bass is handled well as well, it does the job of providing melody to these songs, 128 Decibels of Hate for example, and should get plenty of people headbanging. I also have to give it to them that the bass playing also recalls a lot of old-school heavy metal kind of grooves, the sort of stuff you might hear in Black Sabbath kind of stuff. I didn't really get the intro closer Shovel where the duo opened with a bunch of feedback, it just seemed out of place to me.
I had read in a review for this album that the vocals were done in a black metal style, and that kind of intrigued me, but once I listened to the album, I didn't really hear anything that sounded black metal at all really. The vocals are actually done in more of a snarl or yelling style that kind of recalls stoner and sludge rock, nothing out of the ordinary. I didn't care for the almost nu metal style of staccato style of singing done on some of these songs though, it's not done badly, it's just not a style I'm partial to in the grand scheme of things. I also didn't care for the Clutch-esque lyrics on Heavy Bolts of Electric Death, I've heard it done by Neal Fallon, I don't need someone else coping the zero-one thing off.
While it's a solid album I didn't find too much to really get excited about over, it was pretty average for me. Like I said above, it's not bad in any way, it's just not really my cup of tea. Check it out if you like doomy sludgy stoner rock.
Overall Score: 6
Highlights: Rendered Hogfat Supersauce, Heavy Bolts of Electric Death, P.N.M.
Posted by maskofgojira at 10:35 AM