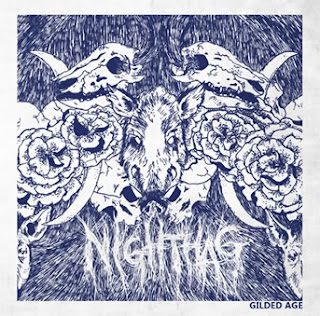 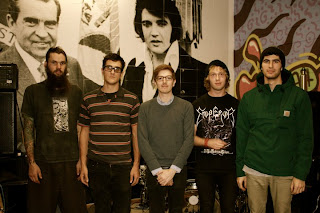 I haven't covered this sort of stuff in a couple of months so I kind of wanted to find something interesting. Blackened crust and hardcore is a style that I've found quite interesting, as all the bands I've checked out have been quite good and interesting. This Australian group interested me with the cover of this album as well as that I haven't heard a whole lot coming from down under this year.
With my increased interest in the likes of screamo, post-hardcore, and crust punk music in recent months, this album sounds just as passionate as those genres should, but provides the intensity and technicality of black metal. This thing just doesn't relent, at just over thirty minutes total, this thing is just an injection of energy for any listener and just got me excited. The vocals also bring the whole hardcore and screamo vibe to life, because they are performed in a throaty yell rather than a scream. Personally, while I prefer the usual screaming, I feel that this style of vocals brings a type of authenticity to a band that definitely makes a vocalist more believable. I also believe that the vocals on here actually suit with what the band are doing and bring an very graspable tension in the music to the surface, which I was quite surprised by.
Along with the obvious black metal infusion, there's also a nice helping of sludge on here as well, probably coming from the crust influence. Songs like Tooth & Hand and Wood Teeth are much slower and work on building much more tension before releasing it into a high-speed burst. I feel like a lot of these songs are also quite well written, most have a natural flow from beginning to end, and almost no track left me unsatisfied, with the exception being Cynic. Personally, I kind of wish that this album had a few more songs or that some songs were a little longer because this left me wanting more.
This is a great album and one that has definitely made me a fan of the band. It's nice to hear a band that presents a nice melding of genres into something that sounds so authentic and passionate, bare-bones exposed and no frills. Definitely check this out if you like any of the above genres, this is some good stuff.
Overall Score: 8
Highlights: Fog Fever, Ash Cloud, Golden Age
Posted by maskofgojira at 11:12 AM