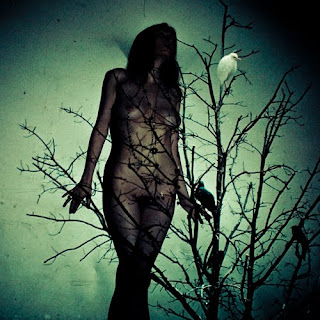 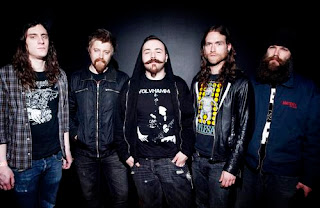 Every person is entitled to a fail or two, and I totally failed with this band. I remember first hearing about their 2009 album, "A Glorified Piece of The Blue Sky," back when it was first released and heard it wasn't anything too special. Then, actually listening to it, I actually really liked it, but never got around to getting their album.
Having been reacquainted with them after hearing Coffin Varnish a couple months prior to this album, I kind of got my ass in gear and listened to as much of their stuff as I could. When their last album came out, I had read that it was standard post-metal stuff and I kind of wrote it off as that, but actually going and listening to it, the source I got my info from (which shall remain nameless) has since been rendered as completely unreliable. What The Atlas Moth bring to the table definitely shows similarities to the likes of post-metal, sludge, and stoner stuff, but it's blended into a stronger individual package. Bluesy riffs intertwined with hypnotic atmospheres and howling screams, all done in ways that people who listen to a lot of psychedelic stuff could dream up. It's dreamy and ethereal, but also very groove driven with enough entry points in to dive into after the initial listen. In other words, the whole thing is expansive, Gemini.
My good friend Jon had remarked in his review that he could see these guys eventually moving onto a similar plane as Mastodon, and I'd have to agree with him. There are similarities between the two, but the biggest one, to me anyway, is that both bands can craft songs that don't really sound like any one else, but have that sort of vibe that make it appealing to different varieties of people, beyond metal fans. There are points on here, Courage or Horse Thieves for example, where I'd go far as to say that these guys trump Mastodon at just making a song so mesmerizing. This is one of those records that just didn't get old, for me anyway. I was literally able to listen to this record for a straight week in my car and not get bored of it, something that I don't think has ever happened to me. As soon as the last song ended and the album started over again, it didn't feel boring, and each time it felt like I could hear something new in the background, a different vocal line, another guitar riff.
It's not often that you find a record that could fit into so many different genres, but actually manages to transcend them all. If I had a gripe, I'd say that there was one song that didn't blow me away, but beyond that, it's great stuff. Definitely go look and find this band, you will not regret it.
Overall Score: 9
Highlights: Perpetual Generations, 25s and The Royal Blues, Your Calm Waters
Posted by maskofgojira at 11:29 AM