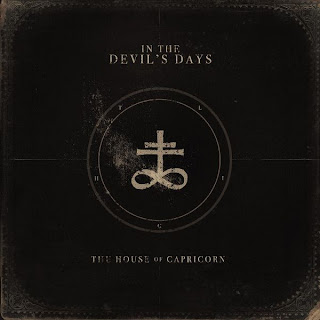 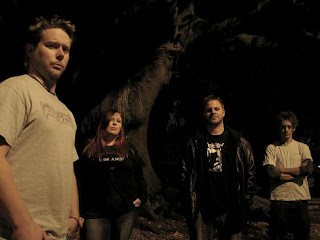 The House of Capricorn is a band that I can remember first reading about last year when they put out their first full-length. I didn't pay much attention to them then but I remembered the name, so when I got this album I figured I should give it a chance. It's just one of those things I just felt like covering.
I can remember going back, before listening to this album, and listening to a couple of songs from their previous material and just sort of laughing because it was a lot different than what I had expected. I guess what I kind of expected was a sort of stoner kind of band that relied pretty heavily on psychedelic elements and maybe some post-rock, what I got instead was some pretty bass-heavy stoner/doom rock. Now, I'll say that I was sold on the music a lot faster than I was sold on the vocals for this band. Musically, the band move between traditional gloomy and minimal doom and more up-tempo stoner rock songs, but when I first heard Marko Pavlovic's voice I kind of cringed. His singing is not the traditional sort of croon, guttural growling/gurgling, or epic siren that you'll get in a lot of bands like this; instead, he has this sort of drunken bellow that made me sort of step back when I first listened. I got used to it after a while, but I will say that there are a few songs where I would have preferred a more steady sort of flow.
Now, there are, if you simplify it, two types of songs on this record, the doom songs and the stoner songs. I described them both above, the doom songs are slow and the stoner ones are pretty up-beat in comparison. That, in and of itself, I have no problem with, but I guess listening to this record straight through several times, I felt that while the band pull off both sounds rather well, something was lost in transition. In my opinion, the slower and doomier songs, Les Innocents and Veils for example, feel a lot more complete and well-rounded than songs like Arcane Delve or Illumination In Omega, that dwell more in the up-tempo realm. That's not even to say that these stoner songs are bad, cause as I just said, the band do pull off both styles rather well, To Carry The Lantern is probably my favorite up-tempo one on here, if you wanted to call it up-tempo, but it's more of a gut feeling that something is missing from some of the others.
So in the end I did enjoy this album, it was spotty, but I'd say most of these songs are good. A lot of this is well crafted and certainly worthy of praise. The vocals might take a little while to adjust to, but beyond that doom and stoner metal and rock fans should take to this just fine.
Overall Score: 8
Highlights: Les Innocents, Veils, Horns
Posted by maskofgojira at 8:03 AM