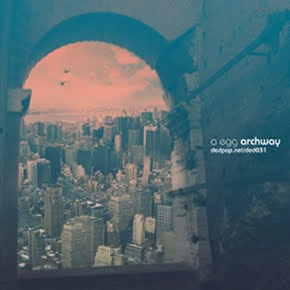 A lot of musicians have said, and this is pretty general, that when they're not playing live and touring, they do not listen to whatever their own style of music happens to be. The likes of Andrew Perring has said that his favorite styles happen to be electronic and metal, but his project goes, more or less, into straight ahead post-rock. I haven't covered a genre besides metal in a little while so here's something a little different.
Now, I'm very hesitant towards stuff that isn't metal when someone sends it to me because I'm not a huge indie music fan, so I can't get down with some of the more indie-rock-ish post-rock groups/projects out there. Thankfully, the first song I heard, opener and title-track, Archway, through a preview actually was quite good. That track had a nice mixture of post-rock guitar lines and electronic drums, and broke off into a more metallic bit at it's conclusion. I wouldn't go so far as to call this blackgaze or post-metal or whatever because, frankly, this isn't a metal album, there's very little relation to the genre besides the climaxes of a few songs. Other tracks on here do vary the style up just a bit, with Greek Salad being a bit more electronic based and Tomb With A View being much more minimalistic and almost ambient with it's guitar work. Each of the four songs is written well enough to get across it's idea in a rather short fashion, leaving an impression, but not really long enough to ultimately stick with you.
Overall it's an enjoyable listen, nothing fantastic, some songs are better than others, but there isn't a bad song on here. It's not very long, the four songs give you the idea and then end, pretty simplistic, but well done. I think if you like post-rock you should definitely take a listen to this.
Overall Score: 7
Highlights: Archway, Green Lines
Posted by maskofgojira at 11:00 AM