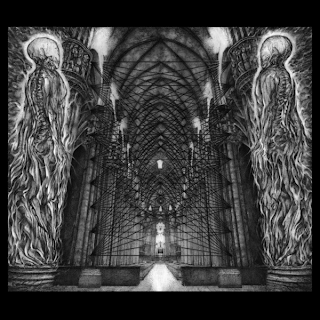 It's been less than a year and DSO have already released another epic album. This little EP contains a single track, much like several other EPs that have been released in the last decade by the band. What can you hope for except for excellence from this band.
Unlike the more chaotic and intense performances that were used on the previous two albums, this new track slows the whole thing down to a crawl. Though the more dissonant harmonies and warped atmospheres remain, they are far more disturbing and morbid than those found on the last few releases, to me anyway. Even when this thing moves into a more traditional black metal pace, I feel like it never really reaches the same sort of intensity that was reached on the full-lengths, instead bringing a more atmospheric element into the forefront. This also sees, possibly, the most melodic moments yet for the band, with a very melodic, clean guitar section appearing just over half way into the track that really doesn't sound like anything I can recall. This is probably my favorite part of the entire song because the clean guitars are nice and folk-ish while a nice bass-line goes almost jazzy underneath it.
Great EP, though it really doesn't surprise me in that regard. This band has proven themselves able to morph into pretty much anything they like and succeed in it. Definitely check this out if you haven't already, I should have to tell you why.
Overall Score: 8
Highlights: Diabolus Absconditus
Posted by maskofgojira at 10:02 AM