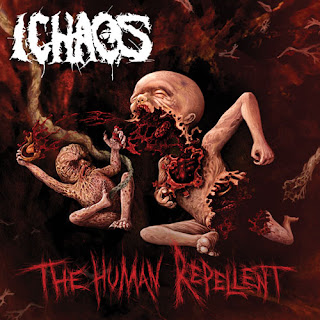 I don't cover a lot of death metal, so when I got a copy of this I figured why not. I'm not huge into that scene anymore but I'm not opposed to checking out a new band or two if I feel an urge to look into it every once in a while. I'll just say that this early on that the worst thing about this album is the album cover, but that's just me.
This debut full-length comes from some rather seasoned veterans of the death metal genre, thus, don't expect a lot of experimentation or something too unique sounding. This isn't going to break any new ground in the genre, it's pretty straightforward death metal, bits of thrash and black metal thrown in here and there for good measure, but beyond that it's pretty much all you could expect from the genre. I think that it has to be said that while this isn't all that original, it's not unremarkable, take this as you will, but there are worse bands out there doing a similar style to I Chaos, this has plenty of solid songwriting and riffs. Personally, I also felt that the vocals were well done, they never really veered into pig-squealing territory, though the occasional guttural did come into play more than once, most of what's on here is a pretty solid growl.
I've said in the past that I like death metal to sound more raw and ugly than polished and clean, and while this doesn't really take the sound into early realms of musty and rather messy production, it didn't offend or bore me as many newer, polished, death metal albums do. For what it's worth, I think that whoever did the mix did a good job with the bass, as in song like Sons of Slaves, as the bass comes through as the most interesting instrument in several of these songs, bringing a Cannibal Corpse-esque kind of vibe to some of these songs. Tracks like Degeneration Sublime and Mass For The Blind are tracks that I could definitely hear being more crossover tracks for kids that are more into deathcore and metalcore since they make use of more low-end chugging than other songs, in my opinion of course. The latter track was actually quite interesting because it was pretty atmospheric, surprisingly, and I liked that quite a bit.
It's a solid album, nothing mind-blowing or fantastic, but I wouldn't turn it off if it came onto my Ipod during shuffle. I think that these are some well crafted songs that should please any fan of straightforward death metal. It's pretty much directed towards death metal fans specifically, but I don't see any reason you couldn't check this out if you liked thrash or deathcore as well.
Overall Score: 7.5
Highlights: Down Comes The Framework, Chaos Revolts, Mass For The Blind
Posted by maskofgojira at 7:53 AM