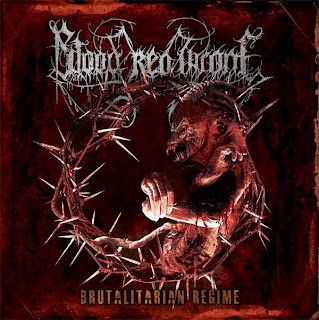 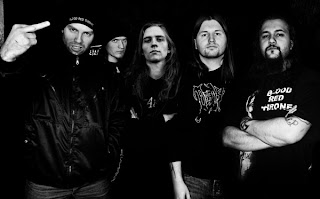 Blood Red Throne is, and has been, quite a special death metal band for me since I first started listening to them close to four or five years ago. At the time I wasn't really into the whole guttural and brutal death metal scene, I'm still pretty impartial towards the latter today, but BRT somehow caught my attention. Despite not even knowing a new album was planned, or even being released, a new BRT record is always welcomed by me.
If there was one thing that BRT has always impressed me with, it's had to have been their ability to take elements from various sub-genres of death metal and blend them together with their own style. Certain albums have obviously had their own flares for one sound over others, but they've always been diverse enough to know how to make a death metal album sound good. In terms of this album, the standard is kept to a higher standard than I felt towards 2009's "Souls of Damnation" and takes a decidedly more traditional approach toward their sound on here, where the the last album was much more melodic than previous affairs. Straightforward in this case means a decidedly more brutal and simplistic approach towards songwriting, which in the case of this album, is actually very good.
In all honesty, riff wise, there isn't too much on here in terms of originality, but to say that there aren't any catchy riffs would be an understatement, because they are definitely on here. Don't tell me that songs like Eternal Decay or Parnassian Cacoepy are unique in their riffing, cause they really aren't, does that make them bad songs, not at all, and I'm biased so you can disregard this if you will, but even at their most derivative, BRT still manages to entertain and keep my head bobbing throughout every song on here, something that doesn't happen with a hell of a lot of other death metal bands. In my opinion, the bass playing on here is simply great, and the band has always made a point to make the bass quite audible in their mixes, but on here, you can't deny how jazzy the bass playing is, hear the fretless work in Trapped, Terrified, Dead for example. That track in particular is actually quite the oddball on here, with samples used in the background, a very prominent black metal influence, and sections with quite minimal playing.
This is quite a good death metal album, following with the band's consistent basis of releasing no crap albums, this fits in with all the others. While it still doesn't top "Altered Genesis" or "Come Death" in my opinion, it's still a very good album filled with plenty of killer cuts of fresh meat. Definitely check these guys out if you like death metal with a good amount of variety among tracks.
Overall Score: 8.5
Highlights: Trapped, Terrified, Dead, The Burning, Melena
Posted by maskofgojira at 6:44 AM