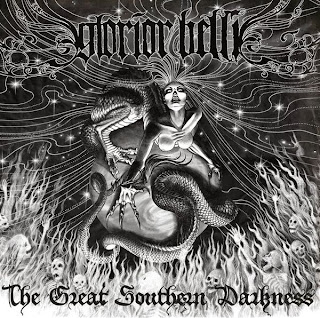 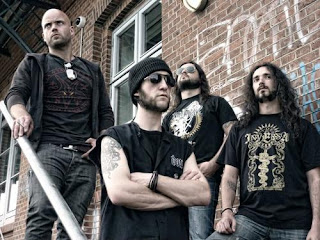 This is an album I've been awaiting ever since I first heard about it, or rather, first heard that they were recording a fourth album anyway. What became the 11 As In Adversaries left a hole open for where this band would go. So ever since this album was announced it became an album that I was anticipating more and more until I could hear it.
It's a bit of a different concept that Glorior Belli have been working towards that has really made them stand out from other bands. The idea of fusing black metal with blues, southern rock, and desert rock is certainly something no one has done before. I can still remember a couple of years ago actually thinking about trying to do something like that myself, since I had never heard anyone really try and mix black metal with blues, since the cross-pollination with jazz has been happening for years now, I can finally say a band is doing that, doing it great I should add. I have to say that while previous albums have hinted towards this sound, more harmony and groovy riffs becoming more and more prominent, I can safely say that this is the rational conclusion of that sound, a mix between the obvious intensity and brutality from the band's black metal side mixed with more simplistic and groovy riffs that prove to be much more memorable than any in their back catalog. This album is also the best paced they've done, with the instrumentals and more atmospheric tracks feeling a lot more appropriate and not just shoved in as they kind of felt in their early work.
In all honesty, I was shocked when I had heard these guys were signed to Metal Blade Records, since it's not usually a label that releases black metal, though they've released some more recently, I was still shocked. Personally, I feel like the production on here is a bit too clean for my taste, I actually think the songwriting is spot on. As I said above, this album has some of the band's most memorable riffs yet on it, They Call Me Black Devil and Bring Down The Cosmic Scheme, I think they've really outdone themselves. I really loved how the band decided to bring in more of that southern rock influence, the title-track, The Great Southern Darkness, really recalls that Louisiana swamp-esque vibe to it. Even during the more straightforward black metal moments on here, it just feels like the band have progressed and made them a lot more interesting than simple tremolo riffing. I'm also a big fan of how the bass was mixed on here, it really comes through clearly and cleanly, Per Nox Regna for example, and was just something that I enjoy hearing on albums in general, but I thought it was a plus and just need mentioning. I think J. delivers some of his best vocals on here, I wish there might have been a bit more clean singing, because it's used pretty sparsely on here, but his growls are just great on here.
Really great album that I can honestly say is their best yet and is going to be hard for them to top. The songwriting is impeccable for the most part and is just downright catchy and excellently performed. You're a fool if you don't at least check this out and you're a fan of black metal.
Overall Score: 9.5
Highlights: Every Track Is A Highlight
Posted by maskofgojira at 8:11 AM