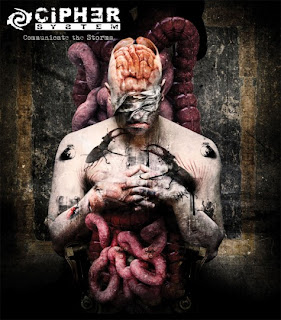 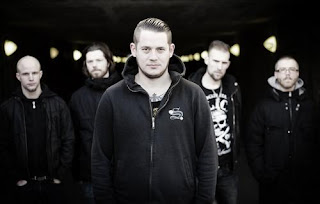 It's been close to seven years since Cipher System released their first full-length, "Central Tunnel 8," and I have to wonder what took them so long. Obviously, I've said this numerous times before that I don't listen to a lot of melodic death metal anymore, or at least newer bands, but their debut was one of those albums that I was really into when I listened to genre a lot more.
Immediately from the first thirty seconds of this record I had a sinking feeling in my stomach. The modern trancy synthes that occupy modern melo-death and metalcore is just something I find irritating, but that's coming from someone who dislikes trance music to begin with anyway. While they are in no way a major part of the band's sound, they are used on here enough for them to get on my nerves, and opening the album with them, 7 Inch Cut, did not bode well for the rest of the album. I also have to mention that I dislike the tone of Carl Obbel's vocals on here, his screams just got on my nerves even more than the keyboards, if you can believe that. I'm sure a lot of people won't have this problem, it's just a personal distaste for the style of screaming he uses throughout the album that I just find really grating.
But enough being the pessimist that I am so prone to be, because this is not all bad. I can safely say that while the keyboards do have that trancy sound that I dislike, I can safely say that the band still relys more of guitar riff for melody and grooves and doesn't rely solely on synthe to overcompensate for lackluster songwriting. The guitar play is well done, and there are real guitar melodies on here, hear the likes of God's Terminal or Objection. I also have to say that the clean vocals on here are well done, they sound modern, yes, but they are not used in as a fall back for lazy songwriting and aren't even used in every song on here. The majority of vocals are still screamed as opposed to sang, which is becoming ever more present in the genre, a lot of bands do the whole 50/50 thing well enough, but these guys tend to stick with the more aggressive screams. Clean vocals on here are used more in conjunction with the screams, like in a song like The Stairway. Personal qualms aside, this album is definitely worth looking into if you want to hear a nice mix of old-school melodic death metal and more modern melodic metal.
It's a decent enough album, nothing special really, but certainly leagues ahead of many other bands. While I may have my own personal distastes for certain things, this is in no way a bad album and is definitely worth looking into. Check it out if you're into the more modern sounding melodic death metal bands.
Overall Score: 7
Highlights: Communicate The Storms, Objection, A Lesson Learned
Posted by maskofgojira at 10:01 AM