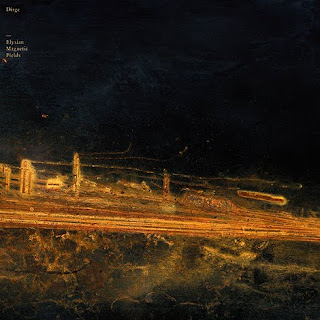 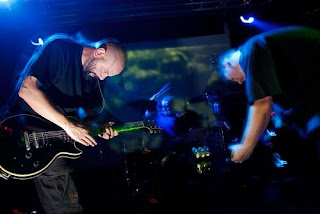 It's surprised me that I've never heard of this band despite them being around for well over a decade already. When I got this album, I went back and actually listened to some of their back catalog and started to understand their evolution. With that being said, I'm still a newbie so I don't really have any real expectations for this.
Seeing, or hearing rather, where the band started and where they are now, I can say with certainty that I enjoy what they're doing here more. I'm not opposed to their Godflesh influenced earlier sound, but it's definitely not as good as Godflesh themselves and isn't nearly as interesting as what's going on with this album. Granted, this album doesn't carry the same amount of weight their previous couple of albums have had, if only because none of these songs cross the twenty minute mark, but still manage to be engaging. It's doomy, it's sludgy, it's atmospheric, post-metal, atmospheric sludge, etc. whatever genre you decide to place it in, those unifying themes found in bands like Isis, Cult of Luna, and Mouth of The Architect can all be found in here, but it's more in hearing a similar influential connection linking them together.
While I might be alone here in this regard, I find that the band is at their best when they are more melodic. Most of these songs are groove-laden, which is fine, I'm definitely not opposed to that at all, but it's in a song like Cocoon where melody is used in reoccurring points, or choruses, that I truly found myself listening for it's return. Having said that, I love a good build as well, and so it's with pleasure that I can safely say that it's the longer tracks on here that give me all I love to hear from "post" bands. The longer songs feel so much fuller and well developed, which shouldn't surprise me seeing as previous albums have had songs that easily topped twenty minutes, as stated above. I guess it's just a personal preference that I found the longer songs to move around and explore more areas of texture and dynamics than shorter tracks and provided a more interesting listen. But to be honest, this album feels long, topping an hour in total, I feel that two or three songs could have been cut to make this feel a lot more fluid sounding. I found tracks like Morphée Rouge and Sandstorm to be rather dull and provide very little to the album as a whole and I feel like without, at least those two songs, the album could have been improved.
It's a decent album, but not one without flaws, but for what it is, I enjoyed most of it. Like I said above, it's just too long for my taste, and several songs, I feel, could've been cut. Look into it if you're into more industrial tinged doom and post-metal.
Overall Score: 7.5
Highlights: Cocoon, Elysian Magnetic Fields, Apogee
Posted by maskofgojira at 7:36 AM