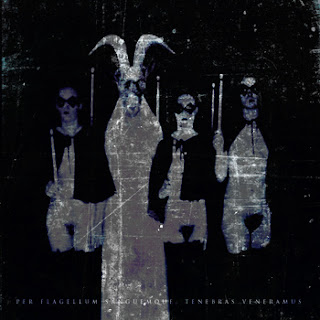 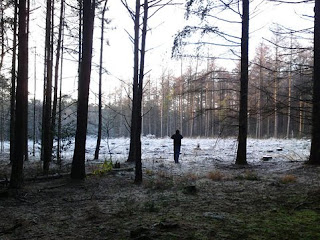 If you've been paying attention to the underground black metal and experimental noise and ambient scenes over the past several years you should already know about Gnaw Their Tongues. The "main" project of Mories, who also works in numerous other projects including Aderlating, Cloak of Altering, and De Magia Veterum. Surprisingly enough, this is the first release to come from the project this year, the least amount of material he's released under the project since it's first appearance in 2006.
As one of the most original and disturbing concepts to ever emerge from the underbelly of the black metal world, GTT has undergone quite the metamorphosis within the last two years. Where most of the material from 2006-09 has been contained within a relatively similar sphere of raw blackened noise using everything from horror movie samples and orchestral instruments to bleaker atmospheres and tortured screams, this and its predecessor, 2010's "L'Arrivée de la Terne Mort Triomphante," have expanded the project out of that bubble. Making use of cleaner production styles, a higher level of orchestral composing (if you will), and a greater degree of refinement in terms of the overall sound. No longer are tracks filled to the utter brim with sounds that mattered or not, you'll find a more open sound in his more recent work.
With all that being said, opener Hic Est Enim Calix Sanguinis Mei does hit a listener right in the face, sounding like some lost horror movie score with relatively no links to his more noisy past, save the use of noise and harsh screams. With the clearer production on here, I find that the element of brutality, or horror, terror, I'm not really sure what to call it, only feels more intense, since instead of a consistent blast of noise, you get slower builds with the strings and horns, building more tension as a track progresses. I'll go so far as to say that this is definitely GTT's most epic release yet, reaching into cinematic-esque territory at times. I do have to mention that with more clarity, that doesn't mean the removal of the more "metal" side of the project. While it's clearly not as abrasive and aggressive as before, the darker and heavier side of the project remain intact, with occasional outbursts on tracks like Tod, Wo Ist Dein Licht or The Storming Heavens As A Father to All Broken Bodies. I'd even say that the drone element of the project is a lot more prominent on here as well, Fallen Deities Bathing In Gall really gives a good indication of just how morbid the project can be within a more noisy soundscape.
Mories has crafted an album that is on par, if not on an entirely different level, with his older work. This is a record that I'm sure will take people a little while to adjust to, especially if what they liked about his older work was the noise, but it is definitely worth it. Fans of orchestral music, dark ambient and drone music, or just really weird black metal should definitely check this out if you haven't already fallen pray to it.
Overall Score: 8.5
Highlights: Human Skin For The Messengers Robe, Tod, Wo Ist Dein Licht, The Storming Heavens As A Father to All Broken Bodies
Posted by maskofgojira at 11:15 AM