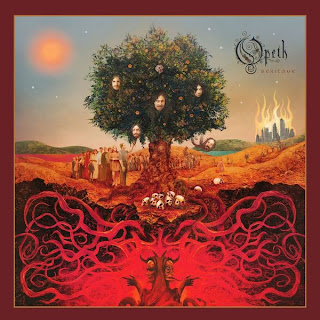 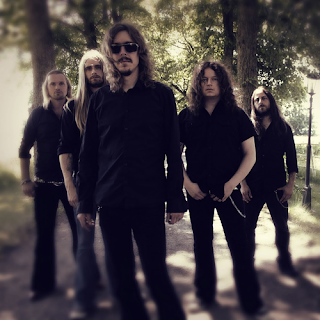 Don't deny it, you, as was I, were looking forward to this new Opeth album. What with all the different things said about it, no death growls, Mikael Åkerfeldt's growing boredom of the "death metal" Opeth, and Per Wiberg's firing, amicably, from the band, there was quite a build-up. After that first single dropped, The Devil's Orchard, the shock and awes only added to the point when this thing would be released.
I'm already aware of how many people have commented on this record in a negative light because, there are no growling vocals, the guitar tone is a lot less "metal" sounding, and the production is in fact a lot more raw and live sounding. These are all facts, no one can deny these statements, you can have your own opinions on them but that's what's on here and you cannot change it. Now, I'll give it to you, this is not a perfect record, the transitions in songs are a bit loose and weak, I Feel The Dark for instance. While not really a weakness of the album, I do feel that Mikael might have been straining his voice during some of these songs, Slither has some sort of rough moments here and there vocally, but I still think his singing is by far and away leagues ahead of other vocalists in metal nowadays. Personally, I love the guitar play on here, it ranges from very progressive, bordering on fusion-esque at times, to very simplistic and calm. While totally Opeth, influences like Captain Beyond, Culpepper's Orchard, The Soft Machine, and even a bit of Pink Floyd can all be heard in here. Hate on it all you like, it's a prog record, and you can trace all the sounds on here back to bands like these and more because it's been running through the veins of this band for years, and only on this album has it come out in the full.
On the matter of the production, this is definitely one of the, if not the most, raw full-length album the band has produced. Raw in this case has more to do with the recording, since the band has said that the drums and bass were recorded together, which is something that can clearly be heard throughout, which I really love. While Martín Méndez's bass has always been clear in the mix of Opeth albums, it's really up-front on here, being very clear and audible in the mix. I think a lot of people will have a problem with the prominent use of acoustic guitar on here because it is definitely a different sort of vibe than what's been on previous albums when it's being used. But that vibe is really something that could be seen throughout the album, in comparison to just the last album, 2008's "Watershed," this album is by far, BY FAR, not as dark and gloomy, let alone some of their earlier work. The atmosphere on here is a lot more psychedelic, I know the 60s and 70s sound is on here, but, to me, it feels like a summer sunset type of record. It sounds like a record where the weather around you is very hot, but the sun isn't really shining, but very calming and relaxing, if that makes any sense.
I'm still not quite sure if this matched, surpassed, or fell short of my expectations because it's different from even what I was expecting, but it's definitely a great record. It's already been said, this album is definitely a grower, on first listen, I bet most people will hate it, I can bet a lot probably won't even make it half-way through before giving up. It's Opeth, do yourself a favor and give it at least a couple of listens, it's not gonna hurt you.
Overall Score: 8.5
Highlights: The Devil's Orchard, Famine, Folklore
Posted by maskofgojira at 8:50 AM