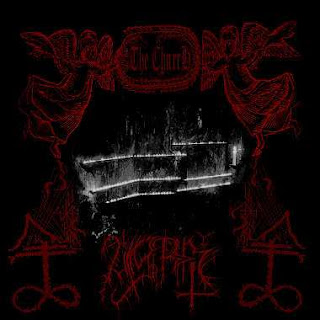 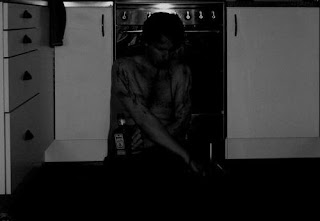 I'm sure if you're a fan of Utarm, you were most likely introduced to the project in the same way I was, with the 2009 demo, "Minus The Divine." Unlike many other releases of the same period, it managed to capture emotion and musical depth together, lightning in a bottle really. Having the great Attila Csihar on his side, this project has steadily risen to, in my mind at least, one of the most well known projects in the blackened noise scene.
Unlike many other blackened noise acts out there, Utarm is truly an innovator and original act, one that is hard to follow. Making use out of just as much dark ambient sounds and soundscapes as noise and black metal, the sound of this project is really unrivaled, at least in my eyes. It's honestly the sound of an extremely tortured snuff film, with each scene getting more and more intense and brutal as it moves along. The hazy production and tortured sounds that move throughout both pieces on here can become quite intense at times. The first half of the record, Journey Through Layers of Lucifer, grows more and more destructive sounding as the track progresses, moving from more dark ambient sections into full-blown atmospheric black metal/noise. The second half, Falling Into The Purity of Imaginary Wastelands, is much more of a black metal track, with tremolo sounding noise that just creates this intense, almost grating, sound while remaining sounds retain that more dark ambiance in the background.
With only two tracks, both are more like lengthy pieces of sound rather than any sort of memorable song. I know I've said this in other reviews before, but this album is more of an experience than an actual album that you'll just put on, cause I wouldn't recommend this to someone that doesn't like to sit down and just concentrate on either the sounds on here or leave it on in the background. Because this is just as ignorable as it is interesting, honestly, and that's not a bad thing, just the nature of ambient music. Probably one of the most interesting factors to this project is the fact that I've seen some people call it depressive, which doesn't really fit, unless you look at the promo picture, musically with the project at all.
This is a brutal listen that should capture the attention of more than a few listeners that enjoy some brutal atmospheric black metal, or noise. Like I said, I see this album as the soundtrack to some sort of brutal snuff film that just gets worse and worse as time goes by. Definitely check this out if you want to hear something unique and maybe a little disturbing.
Overall Score: 8
Highlights: Journey Through Layers of Lucifer
Posted by maskofgojira at 11:35 AM