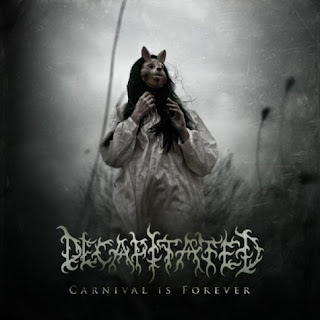 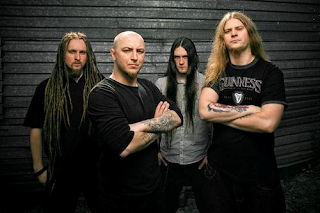 I feel like I shouldn't have to divulge into Decapitated's past too much, everything that's been said about it has been said, so let's focus on the now. The band has released some of the best modern death metal albums of the last decade and are now going through a rebirth. I've heard mainly good things, a few bad too, but I was excited to hear this album when I heard about it.
Much like the 2006's "Organic Hallucinosis" album, this new album sees Decapitated treading into more modern groove oriented sounds, as oppose to the more brutal sounds of their first three releases. There's a definite Meshuggah quality to some of these riffs, especially with opener The Knife, which, while I'm kind of finding this sound to become overdone with the surge of djent bands doing this style, at least Decapitated are sensible enough to make only one trick of theirs. Vocalist Rafal Piotrowski definitely does have more of a harsh yelling style of vocal that isn't that dissimilar to that of Jens Kidman's own style. If you're thinking that the band have abandoned their death metal roots, you're probably not giving the band enough credit, cause there are most definitely songs that recall more of a sound that'd be more present on albums like "The Negation," like the title-track, Carnival Is Forever.
The secret weapon on here is the fact that even if this is a more groove oriented album, Vogg's riffs are still really freaking catchy. At it's weakest, you'll hear tracks that are a bit too rooted in a groove and really don't feel like they go anywhere, United, and at it's best you'll have songs that just go into new directions and are able to mix the band's old and new sounds together, Carnival Is Forever. Definitely the riffing sticks with you, even from a first listen some of these grooves and riffs just click, at least with me they did anyway. I also feel the need to compliment new drummer Krimh for his performance on here, as he's definitely a worthy replacement for Vitek, some of his fills are just great, I love the cymbal work on 404 where he's basically just dancing around all of them, just great, and hopefully something others will not overlook. Personally, I'm a bit fan of how the band are starting to integrate a more atmospheric element into their songs, hear Homo Sum, which really just prevents this from sounding as one dimensional as some of their older work could've been seen as. I also enjoyed how the band were willing to make use of softer passages, like the intro to the title-track or closer Silence where acoustic guitar is utilized, the closer in particular is quite touching to be honest and is a fitting tribute to Vitek.
Definitely a good comeback album, not as great as I think some might have hoped it to be, and it is different, but I still enjoyed it. I could definitely see a lot of these songs going over great live, and I should hope the band continue to pursue some of the newer sounds they used on here in future releases. Definitely check it out if you like progressive or technical death metal.
Overall Score: 8.5
Highlights: Carnival Is Forever, 404, A View From A Hole
Posted by maskofgojira at 8:17 AM