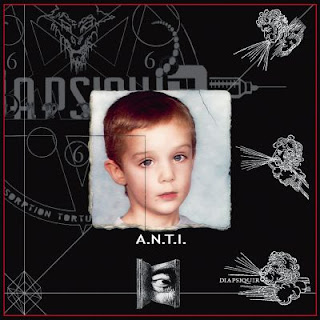 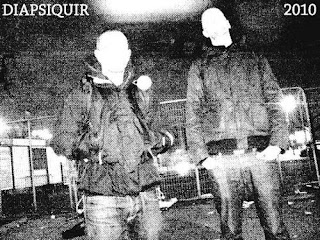 Since the release of "Lubie Satanique Dépravée" back in 2003, Diapsiquir has been sort of a hot-button band. With each release the band have kind of shifted their style to become more adventurous and unique. It's been over five years since we heard any new material from this camp, but I've heard nothing but good talk from people who have heard this.
This thing wastes no time getting itself off the ground, from the first five seconds of Ωlow, you know this is not just "industrial black metal." Within this song alone, you get crazy and discordant black metal, pounding electronic beats, and a definitive hip-hop influence. Beyond that, this record shows the band at not only their weirdest, but possibly also at their most accessible as well. There are actual hooks and melodic vocal lines that are sure to get caught in at least one person's head. Experimentation is fine, but I'm a little turned off by the sound of hip-hop, just a personal preference, and I guess I just don't really get it. Further down the line there's also a definitive post-hardcore sound, reminiscent of a band like Glassjaw, to a certain extent of course.
This is still just as abstract as ever, in terms of the more metallic side of things. But to make a statement that actually might piss some people off, a lot, if not most, of the black metal sounds of the band's past have been removed from this record. A lot of songs on here still make use of very dark and dissonant sounding melodies and chords that remind me a little bit of noise rock, just listen to Ennui. The electronics on here also retain their harshness and morbid shifts, like the trumpet solo on Fais-le that just gets sped up until it becomes just another pulsating beat. Harsh noises and confusing atmospheres just dominate the record, making the sound incredibly off the wall and really presenting you, in essence, avant-garde music. Along with quite a bit of a jazz influence, A.M.A.C.C., you can simply imagine how odd some of these songs are actually composed. If these don't convince you that this is a crazy record, than nothing will.
This is a really odd record, it really throws out of any preconceived notion of "normality" and just makes anything relatively accessible as odd as possible. This is not a record that's easy to listen to, let alone get into, and it's really up there as one of the strangest records I've heard all year. Check it out if you want to hear something extremely weird and disorienting.
Overall Score: 7.5
Highlights: A.N.T.I., Ennui, Kmkz
Posted by maskofgojira at 11:53 AM